Skip to content
The doc said Day100, I thought it was Day99 but whatever it is, it’s a walk in the park! Actually, today, it’s a swim in the park – it is POURING outside – a miserable day here in the city.
I started this morning with Zometa (first time in six months) and of course it took longer than anticipated. By the time I got to the Doc’s office it was quarter past Eleven and I was supposed to be there at Ten! Much to my chagrin, The MMRC (related to the MMRF) was at the hospital today for a conference and my Doc was doing the introduction – at 11:30! He asked me to wait till 11:40, then he’d do my biopsy.

The biopsy went without any complications. Unlike prior times, the aspiration (removing fluid from the bone marrow) was first and the actual biopsy, the removal of a piece of marrow, came second. I know there’s a local anesthetic in use but man that aspiration just sends a chill up the spine. Bottom line, it’s done and I am none the worse for wear. We discussed sending some of my marrow to the MMRC but the doc expects there to be no disease so sending a sample to them won’t do any good. However, he did keep a sample for his research so we have it on “file”.

I’ll get results next week and will see Dr J again after seeing Dr R in June. At that time we will discuss next steps and what potential maintenance programs to consider. I’m hoping for a return, from the bone marrow biopsy, of 0 plasma cell penetration. Ill get my bloodwork, specifically immunofixation tomorrow (after I call them to ask for it to be released) which I’m sure will all be good.

So here’s some of the gore! 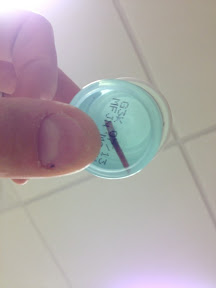 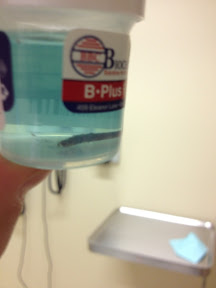 What you see there folks is what was pulled from my right hip this afternoon!  That is my bone marrow and that looks like a pretty big piece!  It didn’t hurt, really, well maybe a little bit.  But I didn’t feel the “pop” that I usually feel when he gets through the bone.  It really was more mind over matter this time…my mind hurt more than my body really did!

This, above, is the fluid removed from the bone marrow. The doc is extracting fluid from a vacuum so there’s not the sense of traditional pain but more like someone is sending an electric shock up your spine, similar in nature to when someone drags their nails down a chalkboard!

I was also able to ask my questions and will need to update some of my pages with information as I’ve been remiss in not doing that. The most basic thing, which I believe is important for anyone that has gone through a stem cell transplant, confirm with your doctor but you can take a pro biotic to get your system (intestinal) back in shape. It hasn’t done everything I expected so the doc suggested also taking cyllium husk (?) to help bulk things up and work with the pro biotic.

I’ve also been cleared for a normal diet! I can have salads and I can have stinky cheese! Wine was cleared for consumption after the last visit. So I see Dr R in June and the will come back to see Dr J after that.

All in all, a walk in the park!