Hello everyone, Jani here again.  First off, I would like to thank all of your for kind, loving and generous comments for Judy and our family.  We are so appreciative.

It’s Thursday now, and much and maybe not so much has happened since my last posting.  Faye Hummel, one of Judy’s closest friends flew in from Colorado on Monday afternoon and stayed the night, leaving at o’dark thirty Tuesday morning (5am) to return to obligations in Colorado.  It was wonderful having her here, I think Judy was sometimes aware, however, now she does not remember.  We have successfully weaned her off almost all the Oxycontin and Oxycodone and she is now relying on a Fentanyl patch (50 mcg/hh), which is applied every 72 hours, for pain management.  She has some very lucid moments and at other times just wants to know “what has happened to me”.  We, including our brother Jeff, have had numerous conversations about what is next.  She will ask when we are going to Twin Falls and I have explained that we no longer will travel there, and then explain to her about her condition.  Last night before going to bed, while sitting on the toilet (we are doing ALOT of sitting on the toilet, but that’s another story), she asked again and I told her about her 100% plasma cells in her bone marrow.  She said “I am going to die” and we replied yes, but we were both here with her, to keep her comfortable and out of pain.  Jeff told her that it would be ok to let go and she seemed to listen and process this info the best she can.  This talk brings forth great emotion from Jeff and I and I feel like Judy feels that too.  It’s a most difficult conversation, but we will continue to help her understand the best she can.

Judy has had some small meals everyday – french toast in the morning, cottage cheese, fruit cocktail, pudding.  Then yesterday afternoon she announced “I am hungry.”  She has a very difficult time finding the correct words for things, so Jeff and I do a lot of guessing.  She kept saying she wanted soup yesterday, but I brought her soup that was not what she wanted.  We finally settled on a chicken sandwich, of which she ate half.

Judy spends her days in her favorite location in her house – her SOFA.  We move her back and forth to the bathroom with a wheelchair.  And then in the evening, we move her to her hospital bed.  This bed is from the Lost River Hospital in Arco.  It’s not so modern, but does have an electric lift for the head/foot and some side rails.  It’s much easier than her own bed.  We have placed her personal bed next to the hospital bed in her room and I sleep in there with her in case she needs anything.  The 1:30am potty stops are killing us!!!

To be true to the character of Judy’s blog, I would be remiss if I did not mention her bowel movements….oh joy.  She went 5 days without one, but there was success when Faye was here.  We had added Senna and Milk of Magnesia and that did the trick.  However now, she has had 2 days of diarrhea, which is hard on all of us, but you do what you must.  Just be thankful, we have added no photos of this….Judy would have!

I have become an expert at checking her glucose and administering her insulin.  This may not seem like much, but for me it’s a big thing…I have always had a huge aversion to needles….so I am rather proud of myself!

Hospice care includes an aide on Monday and Thursdays and the hospice nurse comes on Tuesdays and Fridays.  They have provided supplies like underwear, pads, wipes, the bed, commode.  In addition, they provided the Fentanyl patches which arrived on Monday morning.

Thanks again for all of your loving support.  I will attempt to post more as I can. 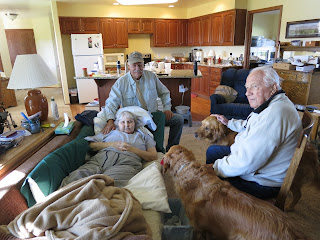 Brother Jeff and father Frank visit with Judy on the her SOFA, with Zoe and Kemmer nearby. Judy on her hospital bed in her bedroom. 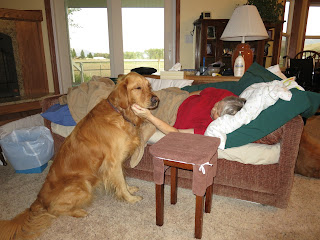 Judy giving Kemmer a pat – how could I not take this photo!!!