Had a rough night with very little sleep. All of my bones ache, especially my back. This could be due to Bendamustine, Aredia, Dex, or just my out-of-control relapsed high risk myeloma.
My mind is NOT CLEAR and I’m EXHAUSTED! I guess, staying out late (9 PM) last night for the play at the school was hard on me. I slept in longer than Jani which is unheard of.

I found a pair of gray sweats and a t-shirt that fit, so I could go to Bunnie Smith’s funeral this morning with clothing on. I have to STOP GAINING WEIGHT from the Dex – I have NOTHING TO WEAR that fits! When my father saw me on the way to the funeral, he said, “Are you wearing THAT to the funeral?” Poor guy isn’t used to me dressing down for formal occasions.

Picked up the mail and delivered it to Paco. Went by the Library to give Wayne Olsen Kemmer’s old collar – he is going to try to get  new one over in Ketchum today.  The giant lilac bush by the library is beautiful today. 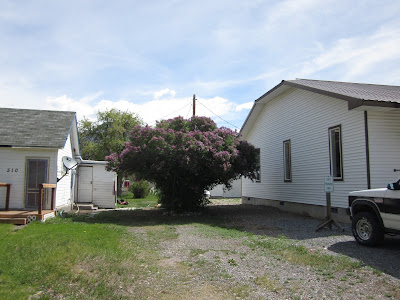 Bunnie Ines Pearson Smith was 94 years old and a good friend who died of old age in an assisted living over in Idaho Falls, Idaho Her last year away from home here in Mackay was difficult, but she did it well.

Bunnie’s  funeral was held at the Mackay Community Church at 11 AM today, a perfect, blue sky, and warm day.  Bunnie lived the life of an original  pioneer woman, often doing both field and house work early in her life in the Big Lost River Valley. Her life sketch was very interesting and delivered perfectly by Russ Smith. Her musical family played and sang during the funeral. 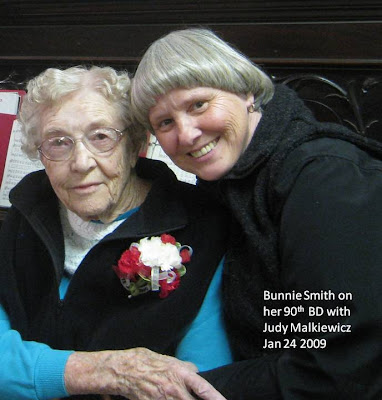 Bunnie was also a lifetime member of the Mackay Women’s Club, which I’m a member of too. Below is a photo from 1 December 2007. Bunnie and her husband, Francis, bought the Al and Mamie West Ranch about 22 miles north of Mackay in 1930 at the foot of Mt. Borah the tallest mountain in Idaho) and later moved to Mackay living in one of the only brick-built houses in town. 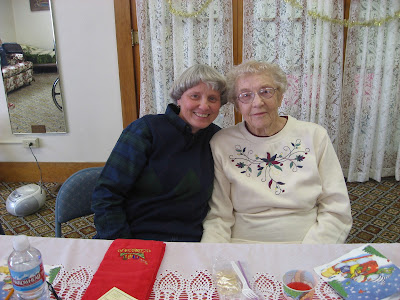 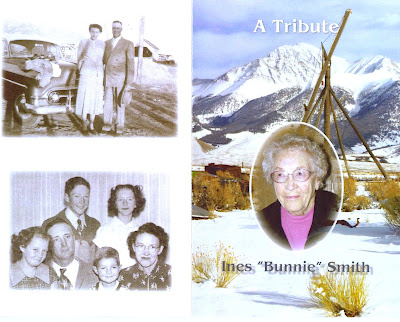 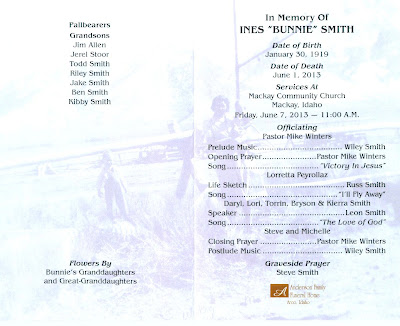 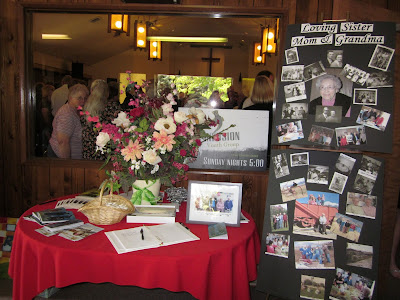 Decided I had no energy for the trip to Mt. McCaleb Cemetery for the burial and the funeral meal served in the Community Church basement and left the funeral. Drove directly home – EXHAUSTED and BARELY ABLE TO MOTOR myself in to the house – Jani helped me. I was both physically tired and mentally done! I slept on the sofa for 2 hours. However, when I woke, I was STILL DONE-IN.
I spent the rest of the day on the sofa groaning with one ache or another including a headache. I’m hoping this is from the bendamustine and will dissipate over the next few days. I also have a new neuropathy pain in my right foot and heel.
Jani did yard work – transplanting lilacs that didn’t quite make the winter. We had 88 degrees today which is unheard of for Mackay during the first week of June.
This was the worst day of my myeloma adventure since diagnosis 24 May 2011 – even those 1st 10 autologous stem cell transplant days. I better feel better tomorrow because this is NO FUN~