Woke to a much better day as far as I felt compared to yesterday. My gastrointestinal trace seems to have settled down and although not perfect, it will do. My legs, especially my thighs are weak, probably talking to me from my 1 block walk last evening.

Was able to drive to the Post Office to pick up the mail and deliver it to my father. Someone stained his front deck and it looks awesome.

Went grocery shopping at Ivies while Jani cleaned and re-organized the garage!

Went to Ladies Aid at 1 PM at the Mackay Women’s Club to have the members show me how to trace a pattern on seven t-towels they are going to make for me. I love this group and only a couple of members were absent today.

Just before 2 PM, I was driving to the Post Office to mail a package from the Women’s Club when I was HIT with a SEVERE episode of what I call “HEART PAIN”. I drove directly home (6 blocks) and made it to the sofa where I told Jani “I WAS DYING”.  This is the 5th episode of “heart pain” that I’ve had since my myeloma diagnosis (24 May 2011). At least 2 of the episodes have been witnessed by nurses and doctors at the University of Colorado Hospital in Aurora, Colorado.

These episodes of “heart pain” are ALL SIMILAR and resemble what I image a heart attack would be like. I have severe pain along a circumference band just below both breasts and radiates up to my right jaw line and teeth. It is terrible pain and takes my breath away. I feel some better if I sit up , but not really. Since I’ve had 2 of these episodes while hospitalized a the University of Colorado witnessed by the nurses and doctors, I sort of know what to do when it happens. In those episodes, they worked me up heart attack with EKG, heart ultrasound, lung CT Scan, and blood tests and everything was normal.
Jani gave me:
The entire episode lasted just about 15 minutes and then I was essentially fine, but TIRED with creepy legs.
I remember reading on the Multiple Myeloma Beacon (http://www.myelomabeacon.com FORUM section about other myeloma patients experiencing similar episodes when taking Revlimid and being treated in emergency rooms, only to be told nothing was wrong with them. Here is the link: http://www.myelomabeacon.com/forum/chest-pain-as-a-side-effect-of-revlimid-or-velcade-t1700.html?hilit=chest%20pain
I liken these “heart pain” episodes to something VERY SIMILAR to the spasms and cramps I get in my legs at times. Terrible spasm pain followed by aching pain followed by “normal” (whatever that is). But with the “heart pain”, there seems to be little I an do to “stretch” the pain away. It is SCARY and PAINFUL.
We had rain off and on all day with cooler temperatures in the low 60s. Lots of new snow on Mt. McCaleb above Mackay, Idaho this evening. This is NOT unusual for Mackay and I’ve got photos of new snow as late at 24 June in 2003. We are expecting freezing temperatures tonight, so Jani lugged all of the porch plant in to the garage tonight. 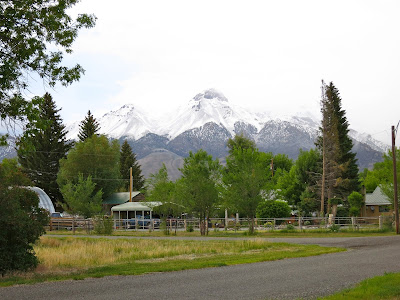