I was supposed to go to get my blood checked in Arco, Idaho this morning, but decided not to. We are going the day after tomorrow to St. Luke’s Hospital in Twin Falls and I will have it checked, then. I’m betting my platelets are okay, but I might need another packed red blood cell transfusion as I’m a tad out of breath with even easy walking.

We decided to go to the old, restored, Shay Engine Trestle Bridge today. Jeff drove my 4-wheeler up to the beginning of the trail, while Jani and I went in Jonah (1999 Honda Passport) with the dogs. We have wanted to do this all summer.

Jani and Jeff walked the trail and I rode SLOWLY along on the Shay Trestle Road on JackRedToo (2012 Honda Rancher 4-wheeler). We stopped along the way and used the tow strap tied to JackRedToo to look for rocks. 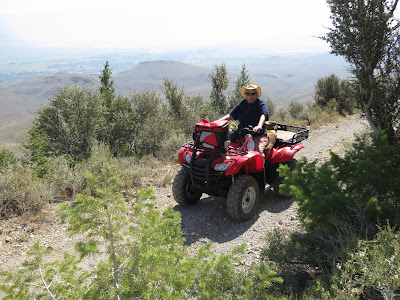 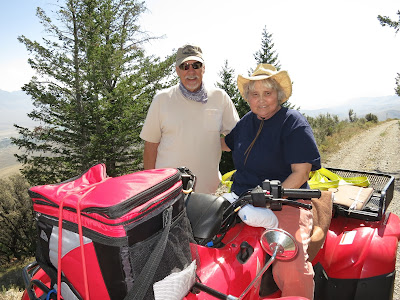 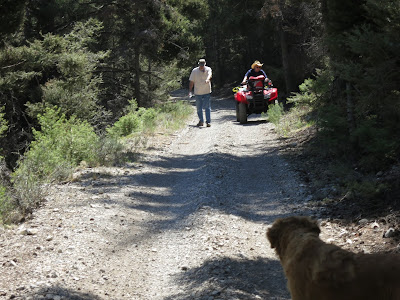 Our Lewis and Clark pose! (below)/ 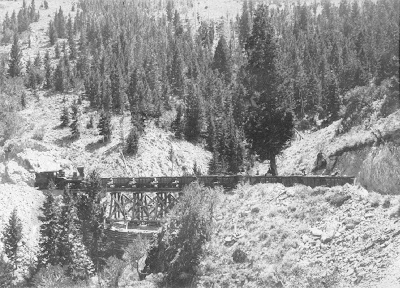 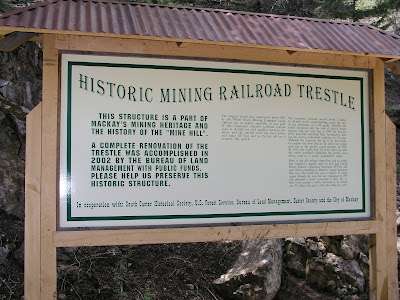 Transcription of sign, which is difficult to read in the above photo.
“The original trestle was constructed about 1901 by the White Knob Mining Company using timbers but at nearby sawmills. It was part of the company’s electric railroad system used to shuttle ore and supplies between the mines and the smelter near the river below, and spans 105 feet and is 25 feet tall as it crosses the gulch.
The mountain railroad covered about 7 miles, its 36-inch tracks witch-backing across the face of  the mountain at a 6% grade. Initially, the trestle supported only the load of electric motor engines and ore cars, but in 1905 the heavier more powerful coal-fired Shay locomotives were put into service, individuals weighing over 30 tons. Although the structure was up the its new loads, its purpose was short lived as the entire rail system gave way to the gravity aerial tramway in 1908. By 1920, the tracks had all been taken up and the entire roadbed, including the trestle was being used as a scenic automobile route.
Much of the old railroad right-of-way and  its trestle have remained a popular route for local and visiting hikers, hunters, site-seers, horsemen, ATV’ers and  even bikers competing in Mackay’s annual mountain bike race. The trestle has seen a number of miner repairs through the years but was condemned in 1995 and underwent a major renovation in 2002. The rebuilt trestle includes  a traffic restriction to all vehicles  over 50 inches wide and a cable side railing for safety.”

I rode JackRedToo with Kemmer home. 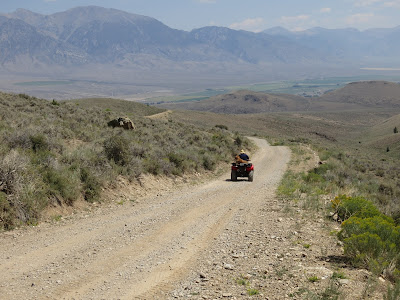 I did well on the 4 hour trip except my legs are so weak, I needed help from Jeff and Jani getting on and off JackRedToo. I’ve just lost all the strength in my thigh muscles and knees. We had a great time – siblings x 3.

Came home and had a nadir after lunch.

Jani went golfing with Helen Marinac after she made dinner (homemade tacos). The skies were clouded with some forest fire smoke, but for the most part that did not bother me at all. I wore a N-95 mask on the way home. Kemmer still loves riding along.