Skip to content
We’ve got to hold on to what we’ve got
Living on a prayer – Bon Jovi *
Day +50ish
It’s been a while since I sat at my desk. I have decided that, as of this week, some element of normality must return. So I’ve turned on the pc, and just waded through several months of unopened email. Nearly 1,000 messages. (Why does junk mail come in waves? A lot of spam about nail fungus.) So, while I’m here, an update for you.
I’m doing ok. I’m very bored, but that’s a minor complaint really. My blood counts are alright – could do with a bit more red in my blood; hopefully that will come with time. But I’ve avoided any nasty infections (so far). And I’m regaining strength, though it comes slowly. Overall, I think my recovery has been easier this time than last, which is a pleasant surprise. Will be nice when my hair starts growing again, and I’m looking forward to having some actual energy.
My relationship with this blog is a bit conflicted at the moment. I know it serves a purpose, but I prefer, mostly, to face the other way. I have a stash of topics that, at some point, I will write up. On the transplant process. On medicine that makes you feel ill. On pain. On mortality. I’m not sure when I’ll feel sufficient enthusiasm to commit these to binary. For many of you, though, who only check in here to see how I’m doing… don’t expect too frequent updates. I’m 50 days in to a 100 day recovery programme. I’ve no evidence yet of how well (if!) it has all worked. I’m intending to progressively return to “normal”, and see how it goes.
— 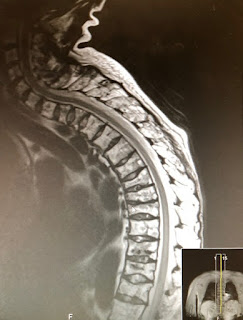 One ongoing issue worth a mention, is my poor old back. I’m posting a recent MRI image of my spine. You can see just how many of my vertebrae are crushed, and how curved it is as a consequence. It has definitely got worse, these last 2 years, which is a little scary. What will happen next time I relapse? I’ve been told that I should expect that the damage is progressive – i.e. it will continue to deteriorate. I find this quite difficult to face up to (I find the picture hard to look at). No matter what treatment I endure and what remission I achieve, I’m left with this creeping disability. Even if they “cured” me, I’d live forever with this. I’ve recently been in front of the neurologist and an orthotics doctor. We discussed every possibility – from surgery to doing nothing. There aren’t any great answers. Surgery really isn’t a credible option: it’s quite likely that, were we to fix part of my back up (by injecting cement to rebuild vertebrae, or by adding some metalwork), all that would happen is it would fail (break) at the weakest point. I’d be worse off after that. I am fearful enough of ending up in a wheelchair, without doing something that might accelerate the problem.
But otherwise, I’m on to a loser. My back lacks the strength to hold itself upright, and even a small amount of curve means the weight of my head (heads are quite heavy) is pulling the whole thing forward. It was comforting to hear the doctor acknowledge what I already know: that standing still is worse than walking; that I need to spend quite a lot of time lying flat on my back if I want to maintain any kind of posture; that it’s unlikely my back will ever be free from pain. Our plan for now is that I am to be fitted with a brace, and see if/ how that might help. The risk is that using a brace leads to loss of muscle tone, making me increasingly dependent on wearing it. But I’m hoping if I moderate how often I put it on, I might be able to mitigate that. It’s got to be worth a try.
I didn’t understand, when I got my myeloma diagnosis, that disability was part of the prognosis. But I know now that similar problems affect lots of people with mm. It really is a bastard.
—

* This choice of lyric is somewhat deceptive. The song came in to my head for the more obvious reason that 50 is ½ of 100.(Woah, we’re half way there!) I’m pretty sure I used the same bit of Bon Jovi, 15 years ago, when writing about crossing the equator, while travelling overland (mostly by bus) from Antarctica to the Arctic. If you’re paying that much attention, I salute you. I liked Bon Jovi when I was a teenager, but only really because I liked a girl who liked Bon Jovi. (She’ll probably read this.)

I like a bit of lateral-ness in music trivia. If anyone ever asked me to write trivia quiz questions (if they’ve any sense they won’t), then one of them would be the names of songs that do not feature on the eponymous album. Some classic examples are “Houses of the Holy” by Led Zeppelin (song ended off on the subsequent album, Physical Graffiti), “Waiting for the Sun” by The Doors (ended off 2 albums later, on Morrison Hotel) and “Sheer Heart Attack” by Queen (3 albums later, on News of the World). There’s a few good examples from 90s indie: “Bring it On” by Gomez  was on their 2nd album, Liquid Skin. Meanwhile “His’n’Hers” by Pulp, “Screamadelica” by Primal Scream, and “Going Blank Again” by Ride, were all only released on EPs or as b-sides.  Are you with me? Too obscure? If you know any more, show off in the comments!