I’ve been a bad, baaaad blogger… and a big, BIG slackerrrr…

That being said, I had labs and an appointment at the end of April and the beginning of May… it’s almost July! Wowza. Time flies.

I had an appointment with Dr. R on Cinco de Mayo to be precise. Unfortunately, we did not think to bring margaritas along with us to DFCI to help pass the time in the waiting room. Next time. ;)

Since celebrating Cinco de Mayo was a no go while waiting, I decided to spend some time in one of Dana Farber’s healing gardens. Very peaceful, quiet space with floor to ceiling windows, plants, and benches for people to sit, pray, think, meditate, whatever. No talking, cell phones, or food are permitted inside. 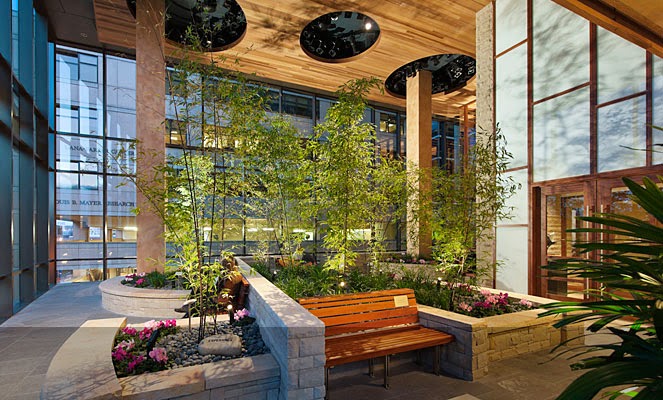 Typically, when I first arrive at DFCI, I check in at the desk and get a bracelet with my name and information and a tracking beeper that I wear on my shirt. Shortly after checking in with the receptionists at the myeloma center, I am called by a nurse for my vital signs, weight, etc. After that, there is usually some time before I am called into an exam room.

Sometimes we wait in the waiting room, but sometimes I will let the front desk know that I would be on the third floor where the cafeteria is, and return a bit later. J loves the DFCI pizza. :)

But at this last appointment, since I was (and still am) on a mind/body kick, I decided to skip the cafeteria and go into one of these quiet spaces and listen to one of my relaxation recordings. It was really nice to be somewhere quiet before the appointment instead of hanging out in the cafeteria. I know, I know…. I’m so zen. ;) I did get interrupted by a big group of people who I think could be new residents or research fellows on a tour for a few minutes. But overall, a good experience. And don’t worry, J did still grab some pizza before we headed back up to the 7th floor. :) Pretty much sums it up :)

I knew all of my test results before the appointment by checking Patient Gateway. So there were no surprises during this appointment. Everything looked pretty decent overall. My hemoglobin was low, and a couple other numbers just slightly “off.”  My free light chain ratio was actually abnormally low for the first time. Dr. R said the ratio was, “a little worrisome,” but hopefully at my next set of labs the ratio will pop right back into the normal range.

When I saw Dr. R back in January, I had requested to skip the 24 hour urine test for my April/May checkup since I had only had an abnormal result once and was quite frankly, really sick of the test! He agreed, and I was beyond thrilled. No big orange jugs of pee in the fridge! Yippee!

However, ironically, when I was at NIH for my (last) visit for the Natural History Study in February, I gave a spot check urine sample, as usual, and it actually showed an IgG Lambda monoclonal band. Never had that before. So of course after that, I was regretting my request to skip the 24 hour urine test in May.

I’ve heard and I know that the 24 hour urine test is much more sensitive than the urine spot check as it consists of testing big jugs of pee urine collected throughout a 24 hour period. Blah blah blah. So I know that I shouldn’t be worried about it. And like clockwork, at my appointment Dr. R said that he wanted me to do the 24 hour urine for my summer appointment. I had anticipated he would say this, even if there was no IgG lambda band found in the spot check at NIH. Dr. R said sometimes a low free light chain ratio can indicate “urine spill.” We’ll see!