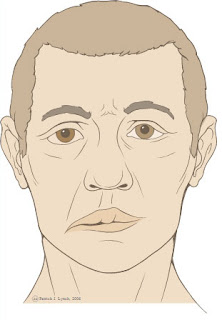 Bell’s PalsyAs if I had nothing else with which to struggle, now I have Bell’s Palsy. I look like the poor man on the right except that the left side of my face is paralyzed, not the right. Actually, I look worse than he does. My tear ducts are involved and I can’t close my left eye. The resulting pain and dryness require me to use eye drops frequently, as well as a special gel at night. My attempts at smiling would terrify children.

Last Tuesday, with a gusher of tears, more from the left eye than the right, it all began. Also, at the same time, my vision changed dramatically for the worse: my left eye, usually nearly 20-20, could barely see. By Thursday I had seen two ophthalmologists, both of whom insisted that I immediately get an MRI and see a neurologist. Which I did. My brain is normal: there is no obvious cause of the paralysis (and, blessedly, no sign of cancer). When they can’t find a cause, they call it Bell’s Palsy. Perhaps the problem is viral.

The onset of paralysis was quite rapid. On the way to the ophthalmologist I could drink water from a sports-top bottle. By the time the examination ended I could not: the water fell out of the paralyzed side onto my shirt.

The most trying aspect is that it remains horribly difficult to read.

In any case, there’s nothing to be done except perhaps for acupuncture. I hope the condition will resolve itself, as it often does, but it can be permanent.