Nick and I headed off up the A40 towards Piddington for Big Ben’s car boot sale today. Two reasons….one, to complete challenge No.28 for my 40challengesb440 and two, because our loft was bulging under the weight of rubbish that we had up there.

It really is amazing what you keep for those ‘just in case’ occasions. Those playstation 1 games that you might use one day because they’re so retro, the baby toys that should be kept because “of course they won’t be dated when Rebecca and Sam have kids’, and the books that you enjoyed reading at 16 and thought you’d still enjoy at 40. Finally we have been strong willed and packed them all into our car….and managed to sell about 1/3 of what we took!

And that 1/3 is pretty impressive really. I hate car boot sales no matter how much other people rave about them. There is a certain type at the Big Ben one that seem to come round, and even if they are getting an ABSOLUTE bargain, still want it for less. If you offered it to them for free, they’d probably ask us to pay them. Tight ar*es!! I would rather donate stuff to a charity shop than sell to those people. Especially the ones who are rude with it. I will admit, slightly shamefacedly, that I laughed in one lady’s face when she offered me a pittance for something as if she was doing me a favour. 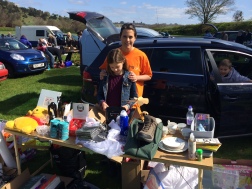 Our other learner was that perhaps we should just let the kids sell everything. Nick and I seemed to get bargained down on pretty much everything. Sam on the otherhand, would ask for an amount and on more than one occasion, got paid more than he’d asked for! I think next time we might just hide in the car and eat our sarnies – the kids are obviously better salespeople than us!

But as much as I hate these sorts of things, I think we will probably brave one more before the end of the summer. Another car boot, or we’re thinking of doing a tabletop sale with a few friends (where I’ll be doing challenge 10 and 34 – selling 40 cakes and making 40 cups of tea). What is left at the end of these will most definitely go to the charity shop though!

The other reason that we have to go back to the car boot sale is that Nick has, whilst I emptied out the loft, discovered a rekindled love of his record player. It started when we went to a little coffee shop in Greenwich which was playing music via records rather than CD’s. So as I went up this time, it was to the call that if I found it, could it get passed down. Now none of this would matter apart from the fact that I gave most of our decent records away at the car boot sale we did last summer…..and for an absolute pittan 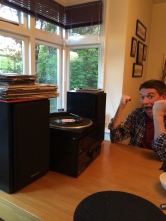 ce :-( Part of me had sort of hoped that he couldn’t get it to work as then we wouldn’t feel so gutted. But this evening when we got back, he managed to make it work….so guess what will be filling up our car on the way back next time!

If you would like to sponsor me with my #40ChallengesB440, please either