Where I left off, stem cell collection was stalled.

This was disappointing. The visiting nurse came again to give me another 2 injections of neupogen. Neupogen was “doing it’s thing”, as that previous night, I had such pain in my lower back for about 4+ hours, I thought I was going to go right into orbit. It was as though someone hit me with a baseball bat. The pain was odd.. it radiated in me in a wave-like fashion & took my breath away.. it seemed to pulsate in a cadence that matched my heartbeat. Or maybe I was just imagining it that parallel beat and I was losing my mind.. who knows.  No matter how I positioned myself in bed—it kept up.  I discovered if I walked around, the motion of walking was a distraction from the pain..but I was so tired..it was a toss-up to zombie-walk, or, to lie in pain. Awake most of the night, I drifted off at about 6am, woke up about an hour later and the pain had subsided. I thought to myself, there’d better be a ga-zillion stem cells floating in my blood stream by now or I’ll be REALLY annoyed.

THRILLED to report that the stalled stem cell collection process became UNstalled.  I received “the call” on Tuesday September 22 that my white blood cell count had jumped from almost zero to 6.0 overnight! I was to report the next day at 8am.  I got another call 30 minutes later..and it turned into a “can-you-be-here-at-noon-today?”   I ran around like a rabbit gathering up my Ipod, magazines and food to nibble on, in prep for a 5+ hour process..and my mother and I raced over to Hershey Medical Center to the “blood bank” area. Yahoo!

In we walked to a large, windowless but bright room, with walls lined with neatly organized supply shelves, wooden cabinets, and important looking stuff; there were 2 beds – each with a dedicated machine that performs the magical apherisis process. A memory foam mattress was a welcomed “feel”. Ahhh. A cluster of nurses knew exactly what to do and how to do it, and were over-the-top friendly and connected to their patient and her needs: little ol’ ME!

Unwrapping a sterile pack of items..one nurse methodically sterilized and connected a number of valves to my catheter tubes and proceeded to connect the machine to me.  It seemed almost like a religious ceremony—the only thing missing was cathedral music. The process began.  Painless. It was fine. I watched my blood travel through tubing and then back again. The tubes were warm.  (ok, I know..big deal… but how often do we feel our own blood traveling through a tube?) Hmmm.. A wheel was goin’round on the machine..a clicking sound…and various monitors, screens and buttons were lit. The nurses were like Star Trek’s Lieutenant Uhura, pushing buttons, listening, analyzing. I was in fabulous hands. The centrifuge was spinning my stem cells into a place for future counting..or something like that.  It was doing what it was supposed to be doing.

And so it went. One hour. Two hours.. but it was unlike being connected to an I.V., getting chemo, where I could  walk’n’roll with your trusty I.V. pole and stretch my legs, head down the hall for bio breaks and such. Here, I was basically immobile when connected for this apherisis process.

I smugly thought I had beaten the system… deliberately not drinking much water the night before.  Duh. They’re pumping saline into me..so, of course I’ll have fluids. So..the ONLY option is the dreaded BED PAN. Such a stupid, minor thing. Nothing to do with my personal BHAG (Big Hairy Audacious Goal) of killing myeloma cells and righting what is wrong with me—the crux of why the hell I was in this situation to begin with. We’re talking about a simple process of fluid elimination. It’s just freakin’ ridiculous though comically memorable nonetheless. I’ll spare all you blog readers out there the graphic details, however, let’s just say I discovered very quickly that for certain bodily functions, one’s body is naturally built for vertical / seated behavior, sometimes such behavior does not transfer elegantly to horizontal behavior. In the process, you must simply blow-your-own-doors-off when it comes to modesty, and mentally box-up any hesitation, Fed-Ex it out of your room, because you must engage your brain that directs control to your body to accomplish the matter at hand.  It was unpleasant, but I accomplished.  End of story.

I wanted to find out who the white coats were wandering about the room. A Fellow; a resident; one pathologist introduced herself to me, reviewing the apherisis process, another came by with a medical student, quizzing her about what she learned in a bio physics course as it related to blood (the poor thing.. instant recall on the spot); she did quite well in her responses. Phones rang, things beeped, all seemed comforting in an odd way. Below is my view from my bed. I blended into the scene. It felt right.  (I didn’t photograph the neatly stacked supply walls..as I may have included a view of a patient in the other bed..wanted to adhere to patient privacy): 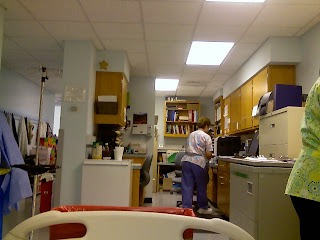 And..this is me, IN my bed.. with the apherisis machine on right.. followed by a pic of a close-up of my cool “valves” connected to the catheter. Absolutely thrilling, eh? ;-) Well, perhaps of interest to those who come across this blog who have MM and are searching for experiential facts. 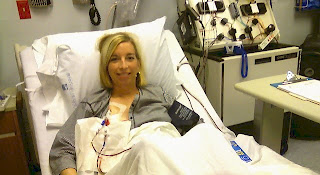 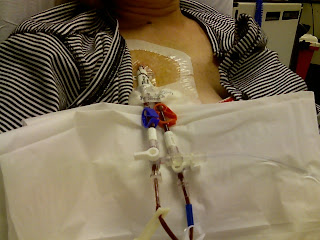 When it was over.. (noon to about 5:30pm) we went home..and I received a phone call that 3.8 million cells were collected, which was really quite good! However, more were needed.

I returned the next morning for 8am collection. My white blood cell count had risen to 14 which was promising. The same process as the first day. A fairly none-eventful session, except at one time, the monitor kept beeping.. the electronic lettered banner read “occluded. line.. patient side..” the nurses were all over it in a nano-second and after analyzing the possibilities.. they morphed from being Uhuras to Kirks and back again. Found there was a faulty connection and replaced it. It’s interesting to be part of the action, the core,   The Action Doll.

It’s great to be a patient in this century of “smart” equipment. I know that monitors have been around for a while of course.. but talking to the nurses who have been in their profession for over 25 years.. mentioned days of their training where they re-used syringes and such…sounds crazy today. Yea, you can have your “Good Old Days” when it comes to medical care. No thanks. Not when you’re the end-point of valve & tubing spaghetti.  It makes you want to dig out a pen and write a check for continued research and equipment funding right then and there. Name a room? a building? Sure. How much? Where do I sign?

The day sailed along. Two more bed pan episodes but let me tell ya—I was a pro by then. A night & day difference from the first go-around. (no pun intended). Not even worth writing about. (thank God, yea, I know). Day was over, home by 3pm.

RING RING: phone call at 5pm. 8+ million cells collected, total, over the past 2 days! This is superb.. as 4 million are needed for my prospective tandem transplant (2 million for October 12, and if all goes well, another in January or February) and enough for two more down the road, because once your body has chemo..it weakens the viability of the stem cells if a “collection” was attempted again.

I’ve learned that should I need donor cells from another person, (if I did not have my own cells in storage) my sister would be my first option..but, even if all goes well, she may still only be a 25% chance of a “match” for this process. There are all these markers within the blood for stem cell matching.. it isn’t a simple blood type match process and “you’re in”. So..then people must turn to a National Blood Bank of stem cells.. and a search is conducted for a better match.  But I’m told there can be higher difficulty around how happy those cells are within my body.. perhaps I’d need medication to make them feel more at home. (Ick.) I’m happy the autologous process (my own cells transplanted back into me) is a process that seems to work, and is the path I’m able to take.