I was trying to think about what to write about for this post when someone suggested that perhaps I should just write a post on our recent holiday. I wasn’t sure, but was recently speaking to someone who is earlier in their Myeloma journey than I am, and it struck me again, that many people think that holidays are no longer possible once you’ve had treatment for myeloma….and that’s just not true.

I know that lots of consultants are different in the advice that they give to people, but mine has always said that so long as I am well at the time, that travelling isn’t an issue. I’m sure that they wouldn’t want me to be stupid and go somewhere remote with no access to healthcare, but they have never put any limits on what I can do. Since my transplant I have been lucky enough to go to Beijing to visit my sister, Morocco on a family holiday, and just now, to Mauritius with Nick. We’re hoping that next year or the year after, we’ll be going to Khazikstan which is where my sister will be moving to from China!! I haven’t checked that one out yet, but hopefully it will be fine. I always go armed with a set of antibiotics just in case, and I always have to pay extra for travel insurance to ensure that we could all be flown back if necessary, but even the latter seems unnecessary these days!

So we’ve just got back from an amazing 6 days in Mauritius….hard to know where to start in telling everyone about this but suffice to say, we were amazingly privileged to go and had the most amazing time. It really was a holiday of a lifetime for us as we would never normally be able to consider something like this. But Nick was awarded this holiday as a result of lots of hard work for his company – he was one of the top performers and won what is known as the ‘Presidents Club’ – an all expenses paid trip to Mauritius….and wow were we lucky.

It was only 6 days from leaving Heathrow on the Saturday evening, to arriving back at 6.30am on the Friday morning….but we certainly packed in tonnes in that time. The flight wasn’t actually too bad….potentially helped by them flying us business class, a couple glasses of champagne and getting 6-7 hours of sleep. We arrived to the news that it would be a 2 hour transfer….really?! The whole island is only 25 miles long. But being too excited to question it, we got in some slightly clapped out buses and started off. Only 10 minutes down the road they pulled over to announce that the surprise was that we were doing the next part of the journey via speedboat around the island! Absolutely amazing and a fantastic introduction to the crystal clear blue lagoon that surrounds the whole country. Stunning doesn’t even begin to describe it. Nick and I were both taken with how green the country is. Luscious sugar cane fields rise 7ft up to the side of the roads, the hills looked like they were covered with a rich carpet, which, all sitting against the background of the pure blue coastline make for a pretty spectacular site each day.

That afternoon was pretty chilled out….we got to explore a little bit around the Four Seasons resort, find our villas….complete with 2 showers (inside and out!), a bath for those romantics who wanted it filled with petals (not us!) or those who were too drunk to make it bed (just in case Dan reads this!), and a back garden with private plunge pool! It really was a hard existence ;-)

Then that evening, we went down to the private beach for cocktails and dinner with live music. I’m not sure that I can stop myself from reiterating how like a fairytale this holiday really was. Despite being out there with 40 other couples from the company, it was all just amazing. The food was delicious…this first night, we had beautiful salads, prawns the size of my palm, succulent lamb, beef, halloumi, chicken…..pretty much everything you could have thought of was served to us…and some of it even served by the President and his VP’s in aprons and chefs hats….a really lovely touch!

The next day (Monday) was fairly chilled….Nick went and attempted to play golf whilst I did a quick 5k run in the gym, followed by a lovely massage. Then that evening we all climbed aboard boats to travel to a different island for a Mauritian beach party….more cocktails, live music and dancing, fabulous food again and our own private firework display from the middle of the ocean!

Tuesday was yet another spectacular day.The day started early with us all being decamped onto Catamarans to sail off to our own private island. Exciting in itself with the promise of lunch, snorkelling, volleyball and chilling out on hammocks. After 30 minutes though, the boats all stopped and we were all given the chance to do parasailing, doughnuts and banana boats!! Bar a small amount of chaffing on Nick’s part and a bruised hand from one of the VP’s knuckling my hand on the doughnuts, we had am amazing time doing that before we were sailing on to our lovely island.

I really understand now why people get into scuba-diving….doing the snorkelling was amazing…it was like being in a tropical fish tank but better! So peaceful and amazing when the fish were fed….they had a total feeding frenzy…very funny!

Once we’d finished that, it was back to the island for a mojito, a little sleep (for me!) and a tasting for Nick of all the amazing rums that they had at the bar…..rum with chocolate/orange, banana steeped rum, coconut steeped rum, lychee rum etc etc….apparently he got through a fair number! But was ok at the end of it so that was ok.

Wednesday saw us go off for a morning of quad biking and archery in the green hills of Mauritius….stunning after having spent so much time on the ocean….and nice to do something active too!

Back to the hotel for a lovely lunch (again!) before it was time to fit in a quick 5km in the gym and then our Gala Dinner at the local golf club. With a champagne reception to start, yet another perfect 4 course meal, and then dancing into the early hours of the morning, it was a fantastic end to a perfect few days. Even Nick’s dad dancing couldn’t get in the way :-)

So you’d think that Thursday wouldn’t count for much. Sadly the pool party they had planned was cancelled as the rain poured down but we still had a Brunch in one of the amazing restaurants. I ate 10 different fruits (just to get a few in for Challenge No 14!) and tried to sober up slightly in advance of our flight home….spoilt by the last cocktail and drinks reception in the early evening before we got the plane home! 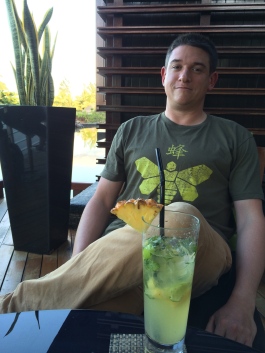 I am sure I’ve missed out tonnes….but would hate to rub things in much more than this ;-)

It really was a spectacular holiday….not one thing to complain about. And clever too….I am now beating Nick with a stick to make sure he works hard enough that he wins President Club next year ;-)