Today is Friday November 13th.  Friday the 13th has always been good or lucky for me vs. the superstition that some believe goes along with this day–so let’s start there on a “up” note.  I’ve been recuperating at my own home now since November 2nd. That included my 52nd birthday as well (..I still find it bizarre that I can be 52…where has the time gone? I thought I was about 35?  Didn’t I just graduate from college about 15 years ago? Yea, right..Holy moly..) but in any event, it has been absolutely delightful being HERE versus in the hospital. Especially the first week, I would just break down and start crying for no reason, other than the joy of being home. Incredibly simplistic and so overwhelmingly wonderful.

When I was discharged from Hershey, I had 7 prescriptions for acyclovir, amoxicillin, fluconazole, prilosec, potassium and compazine. Oh yea, and a hydrocortisone cream for post-hive annoyance. (sigh). Taking a fistful of pills daily was not exactly thrilling for me..and the potassium pills are gigantic. The good news is, I’m now down to just 1 pill: acyclovir, which I’ve learned I need to be taking once per day for A YEAR.. as it is important to do so to reduce the chance of getting shingles down the road.
Interestingly, my blood pressure spiked the last few days at Hershey, so I obtained a new hypertension medication (I have been on meds for that condition for about 12 years..both parents are hypertensive, so, I get it honestly). Without meds, we’re talking 170 / 110. With meds, 130 / 72 or thereabouts. However, since I’ve been home.. my BP is low & normal without medication… unsure why that’s the case. I knew that the MM meds I took since April & ceased taking in early September caused my BP to normalize as well and my hypertension meds were not necessary for those five months. Hmm.. that’s one positive thing about having multiple myeloma—now where’s my list and I’ll add this to it.  Oh wait.  I don’t’ have a list.

Re: vaccinations.. early in 2009, prior to my diagnosis of multiple myeloma, I paid extra (since I’m under 60) and had the shingles vaccine. Several people I know, including family members, have had shingles in the past few years and after seeing unbelievable suffering first hand from THAT awful condition, I knew it was one thing I’d like to avoid. Another weird auto-immune related condition that can surface for a number of reasons after lying dormant. Now, interestingly, THAT vaccine, and in addition, ALL of the vaccines/immunizations I had the day I was BORN and in very early childhood.. may basically be null and void due to the chemo/transplant process. I’ve been told that I will have to be revaccinated for EVERYTHING sometime within the first year after my treatments have concluded. That was a new one to learn. I was sharing this with a friend and he said “Gee, it’s like you have to be rebooted.” Ha! Makes me a little nervous..and I’m not sure why, exactly. But, of course I’ll move ahead with it as prescribed when the time comes. I just don’t want my system to crash after the reboot. Maybe Windows 7 will help. ;-)

The 2nd day after I returned to my home, I had an appointment to have my big honkin’ apherisis catheter removed.  Understandably, after 2+ months, the little bugger was happy in my upper chest. It made friends with my surrounding tissues and began to cling to it, and from what I learned during the 5 or 10 minutes (which seemed like an hour) when it was being removed.. there is a “cuff” at the end of the tube that was in my jugular vein..and it just didn’t want to come out easily. Local injections of lidocaine kept me from feeling pain in the area, but there was applied pressure and heavy tugging that was felt instead. Weird ..but the end result was worth it. The area was tender for over a week, and just yesterday I became giant BandAid-FREE on that spot. I no longer feel like a Star Trek cyborg and I can wear a turtleneck. Yay!

I was told that I would be feeling stronger each day..but, I would be fatigued moreso than anything. I thought “yea yea … fatigue, fatague..…we’ll see about that.” Well, I’m seeing now they were oh-so-correct. Being tired & feeling “spent” is a new feeling to me. Every day here at home, I wake up and think “well, TODAY I’m going to do this, that and the other thing..” in the confines of my own home. I barely make it to “this” and I have to rest on my sofa. Sad, eh? But, I am now a believer in rest. The fatigue, plus my sleep pattern that’s still not normal ..as I wake up at about 3am or 3:30am every night and can’t seem to go back to sleep.. does do a number on you after while. The expected fatigue from going through this process, coupled with the thrown-off sleep pattern.. no wonder I feel fatigued..(sigh). It’s getting a little old now, I must say. I do try & get out at least once a day or every other day.. the Big Outing is 10 minutes at the grocery store which is about 5 minutes from my house.

I took a chance yesterday & went to the dept. store (for an additional 10 minutes) that is adjacent to the grocery store to buy a scarf for my no-hair head. Interesting.. kind sales associates in the store commented on “how well I wear a scarf”..and they looked at me with big (kind and sincere) cow eyes..probably realizing I have no hair and the reasons for it. Then I quickly created my own stories about that, remembering my own reality, and I had to fight off the tears..always a big challenge for me as I can cry at the drop of a hat. (sigh). The whole hair thing is something i’m getting used to. I’ve managed to hang onto my eyebrows by some miracle..though they’re thinner.  And my eyelashes are very thin as well, but the magic of mascara helps. I have options with my hair.. I can scarf it, which I’m sure I will as I have tons of scarves..however I also have two wigs:  one is a full wig that I purchased back in August as I wanted to get all fo this buttoned up before I left on a medical leave..it is probably the color of my “real” hair. We’ll see..whenever it decides to grow in. The other is a partial wig, that one must wear under a hat or scarf–because there is no top, just lace elastic that keeps it on your head.  Pretty cool. (though I look like a scary clown or maybe Ben Franklin if I take off the cap..with the longer hair & zero on top — Ha!) but, it’s still fun for a quick & different look. (see both below). 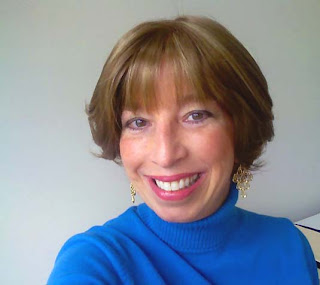 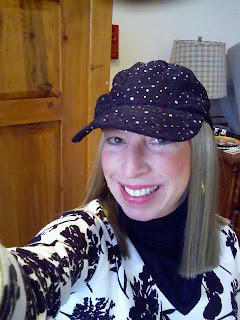 Anyway, I probably over-did it during that extended outing.. between the time and the emotion expended. …because I came home and had to lie down. God, I feel like some old lady sometimes.  Lesson learned, for sure. Now I know why they say 4 ot 6 weeks recuperation time..I”m taking almost 4, so, I hope the next final two weeks I zoom into feeling really great & re-energized!  I do notice I have more energy in the morning.. I really fade as the day goes on.  Glad I now have a DVR and can record some of the worthwhile television to view when I’m awake.

As I continue my hermit-mode at home, I’m still figuring out what I can eat, and what isn’t good (yet). My entire G.I. system is out of wack, most certainly.  Morning nausea doesn’t happen as frequently any more..but every time I eat..there’s a “hmmmm”  afterwards..as I try to discern if it was a good idea or not to eat whatever it was that’s now working its way through me. (sigh).  The advantage of being a hermit is you’re always close to a bathroom.  Your OWN bathroom, an added bonus.

One-on-one interaction with people (who aren’t sick) is ok..or, breezing quickly through a grocery store as needed.  But, given the seasonal and swine flu that are still swirling around..when I visit my hospital where I work (Lehigh Valley Health Network) where I see my oncologist or get bloodwork.– I take precautions when I visit the hospital.  I’m sort of incognito.. wearing a scarf on my head, and also a mask over my mouth/nose.  People are coughing in the waiting rooms..it just freaks me out. I look forward to when it’s ok to simply be in meetings again after I return to work.. and to go to the movies and be “normal” and not be so paranoid. Pre-treatment, I also LOVED going out to dinner.. now, my mind can’t help creating stories about “..hmm..I wonder how well they’ve washed the lettuce?” and my mental appetite drops to zero.  I haven’t been to a restaurant of course—but I’ve gotta get back in the saddle soon. I don’t want to turn into Howard Hughes after all this. There’ll be Jody at her desk, wearing a head to foot zippered suit with an oxygen mask, (sigh). This experience [at least for me] does a number on your brain about cleanliness, germs and infection, for sure.

So, this may be my final Post in this blog of mine. Should I have the 2nd transplant in early 2010, based on the results of the November 30th bone marrow biopsy.. I may continue with that experience and write more. Or, should anything occur that I feel compelled to capture in writing..I may do so between now and then. I have received communication from people who are multiple myeloma patients..and have found this chronicle helpful. It has also been a way to keep friends and colleagues informed about what’s going on with me. I purposefully have kept names of physicians and nurses private, though all have been absolutely wonderful at Penn State Hershey Medical Center and at Lehigh Valley Health Network.

Though each person like myself, someone with multiple myeloma, is different and goes through the experience differently.. there are some core things that may be the same. This has been my journey, thus far. I know there are people with health situations that are far far worse than what I have experienced, and I empathize with them. I have learned a great deal about myself and about things that truly matter to me. I do see all kinds of things differently now. Perhaps these are some of the things I would have never learned if this condition had never surfaced in me. In my search for “the why” behind making sense of why this cancer came into my life, maybe that’s a start.

I continue to feel fortunate.

Want to read earlier posts? Click below on “Older Posts” and it’ll take you to the top of this page. See older posts when you click on September or October. They’re in numerical order.

Want to EMAIL ME PRIVATELY? Go to my small photo at the upper/right on this page and click on VIEW MY COMPLETE PROFILE. You’ll see CONTACT: EMAIL in a box, on the left. Click on EMAIL.