I also took 40 mg of oral Dex (each tablet is 4 mg, so I have to take 10 for 40 mg). The oral Dex almost instantly cured my creepy leg syndrome, but it wasn’t long before I had good case of gastritis going AGAIN. I took Carafate Suspension and that helped some, but the best cure for my gastritis is a slice of lightly toasted bread. I attribute the gastritis to the dex and not the pomalidomide. 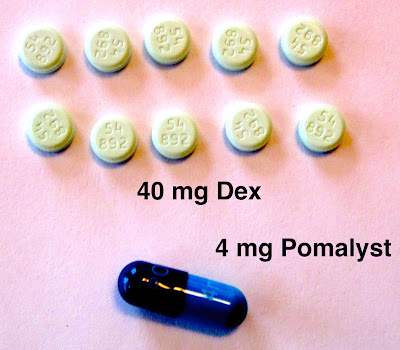 So far, I think the only side effect that I’ve had after one capsule of pomalidomide is being tired almost immediately after taking it. I slept well from 7 PM until 11 PM. After that I didn’t sleep too well, but I stayed in bed and only watched television for about 2 hours around 1 AM.

Day 2, 6 Mar 2013 I had continued gastritis. Around 4 PM, my creepy legs returned with a vengeance which I’m pretty sure is from the pomalidomide and I had a frontal headache which I thought might be from our cloudy, off-and-on snowing weather today. I ate dinner early and the headache disappeared. Had another poor night of off and on sleep. I finally took 1/4 tab of oxy (a little medicine goes a long way with me) around 2 AM for my creepy legs and slept until 6:45 AM – this is good.

Day 3, 7 Mar 2013, gastritis. Up this morning, clear of thinking and don’t feel hung-over from the 1/4 tab of oxy last night. Mild gastritis. No creepy legs this morning. I do have a burning sensation over the crown of my head, but it does not itch. I had a similar, but WORSE burning and itching when I started Revlimid, but it dissipated after about a week and never returned.

Summary of “maybe” Pomalidomide Side Effects: