Skip to content
I got two strong arms. Blessings of Babylon. Time to carry on
The Riddle – Nik Kershaw *
Day -2 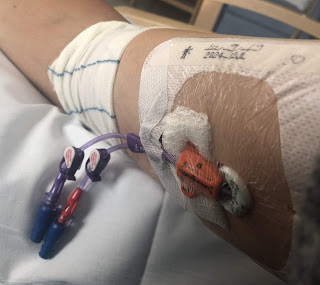 I had a “PICC line” (catheter inserted via a vein) 7 years ago for my front line chemo. But in those days King’s insisted on a “Hickman line” (port inserted directly into the jugular) for transplant. Medicine progresses. Today I need only a PICC for the transplant, which is a lot less unpleasant (a hole in the upper arm, rather than one each in the chest and neck). Even the PICC insertion procedure itself is improved, since the location of the tip of the catheter is now monitored with ultrasound, instead of x-ray, making the process quicker and meaning it doesn’t have to take place in theatre.

I had a weird experience during today’s insertion when I could suddenly hear a whooshing sound in my ear and a sensation like water was coming out of my ear hole. Apparently, this is what happens if the tip of the PICC is close to the jugular. It was a surprise to me, but not to the medics. Once the PICC was fully inserted, it stopped.

So, plumbing now in place. One obvious improvement to human beings would be if we came with a port already built in. So that’s something I might ask God for, for Christmas.

The countdown: Tomorrow = “day -1” = chemo. I just referred to it, speaking to a myeloma friend, as “poisoning”. He suggested “cleansing” as an alternative description. I’ll go with that. The pharmacist tells me the anti-nausea meds have improved since my last transplant. So maybe tomorrow, too, will be easier than my memory tells me? After all these delays, I won’t quite believe it’s happening until the chemo goes in. My nurse compared it to sitting on a plane waiting to take off. Not a bad analogy – there’s always the possibility for delay or cancellation, until the moment the wheels leave the ground.

* I used a lyric from “Knock three times” for this post, but then I realised I’d used it before. And that will never do. So, I’ve edited, with an alternative. Not that Nik Kershaw should be a stand-in for anyone else. I loved this album in 1985 …