My light chains have opted to split the difference – 2 more tests both giving results almost precisely in between the previous high and last month’s dramatic drop. What that means is not obvious. The hospital Dr sends my GP a letter after each appointment, and I receive a copy. Last month he described me as a “difficult case”, which I think means it is unclear how we proceed, rather than that I am a pain in the arse. 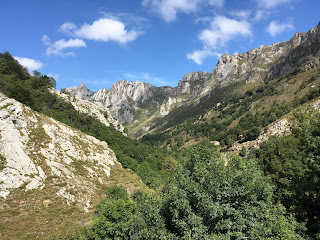 I’m not quite triggering any single ‘reason to treat’ criterion. My κ/λ ratio, which had soared well over the 100 threshold, is back down. And I’m not reporting any symptoms. Indeed, I’ve just been on a walking holiday in the Spanish Picos de Europa mountains, so I must be in reasonable shape. I did find myself puffing on the uphills, and that may reflect the most significant bad omen for now, which is my relentless anaemia.

My haemoglobin level is moving from normal-for-me (which would not be normal for you), downwards to not-good-for-anyone. If it continues to fall, it will become a reason to treat in its own right. Being consistently significantly anaemic is not much fun. (That’s the boundary of my Saint Etienne infused positivity. That and achy hips.)

So, we wait on more and frequent blood tests, and another MRI. Back in the MRI machine, for a whole body scan. The outcome of which can be compared to the one I had last December. This really is the full English breakfast of scans – neck clamp, head clamp, weights and sandbags everywhere. Contrast dye injection, prolonged breath holding, the lot. And so so noisy. Still, better this time without the blocked-nose-sore-throat cold, which made the previous experience that much worse.

I was also booked in for a bone marrow biopsy but the consultant decided that having a BoMB right now is not really worth it. (I can save my anticipation for the ones that will almost certainly be required for the clinical trial I will likely find myself on at some point soon enough.) In itself, cancelling that appointment is something of a result.

In other news, I’ve been heartened to read several articles about a new treatment called “CAR T-cell therapy”. It involves the patient’s own immune cells being harvested, modified to attack the cancer cells, and then re-infused. There have been encouraging trials on myeloma patients, and the process has just been licensed to treat one type of leukaemia. It is quite possibly going to become a functional cure for some (many?) people. (Putting the Car-T before the hearse?) I just need to hang on long enough. In that context, my endlessly dithery disease is exactly the right kind to have. Long may the dithering continue.