It’s been a week of ups and downs, mostly downs, which I will try not to delve too far into details about because this post will get too darned depressing. In my almost 54 years, there have been many times I have asked God for things that were not granted; sometimes begged would be a better word. A little over 12 years ago, that begging/praying was that the testing they were doing on my husband would not show cancer. We all know how that one played out. Over the next months/years, the prayer/begging turned to, “please don’t let her lose her dad while in her formative years” and “please don’t deny him the chance to see her grow up.” (2 very well known MM specialists assured us he only had a few years left.) Well, for once (oh maybe there were a few more times in 53+ years) my prayers were answered. Her junior year in college is finished but she has the rental house until 5/19. She invited us down to her birthday party, before they went to the bar, where she would not have to use her fake ID for the first time. (insert eye roll here) We walked in the door to see her tan and tall (5’5″ but wearing heals) and all gorgeous and made up. We were both taken aback. Where did our little girl go? The hardest thing about her being at college is not witnessing all the wonderful things happening in her life. At least we got to be part of this one. We are proud of her. Several boys came up to shake our hands and tell us how much they thought of our daughter. Girls hugged us that we don’t even know and it was plain to see that our kid has made a lot of awesome friends at college. It was a happy night. Oh, and they all loved the dog. Our Lacey girl was a big hit.

But, and there’s always a “but” isn’t there? This is all so overshadowed this week, and always is really, with myeloma hanging over our heads. This week, it was the lives of others around us that made happiness feel so damn fragile. The day before we left to go see her, we were at a baseball game to support friends whose son killed himself on New Year’s day. He was 21. They were throwing out the first pitch in his honor. This was a gorgeous, talented, amazing young man who had everything going for him, except for a vicious on-again, off-again girlfriend who was determined to make his life hell. Now, all we can do is be there for his parents and sister to show that he is not forgotten and that we are here. I hug them, HARD, when I see them, so they know I mean it. The day we got home, yesterday, I get a text from my friend that a woman we know died suddenly on Tuesday, right when her 21 year old twins are about to graduate college. Then, today, my sister calls me crying. Her friend’s 17 year old son was diagnosed with leukemia at the end of Jan. and has been in the hospital ever since. Instead of getting ready to go to his junior prom, he was told things took a turn and he’s going to have to have a bone marrow transplant after all. My sister had to run to her friend’s house with a towel around her head because her friend “broke” sitting in her car in the driveway. She went over to hold her while she wailed to the heavens. She called out from work and is going to spend the afternoon with her. She told me she saw and heard things she will take to her grave. A grieving parent breaking after being strong for over 3 months. This is faith shattering stuff.

I got off the phone and thought about all that has happened to these families and realized that their lives entered a twilight zone, a place where nothing made sense anymore, just as our lives did on a Thursday back in March of 2007. A place where you cannot ever feel solid ground under your feet, where life is not fair or just, where you cannot even trust feeling happy because you wonder what’s next. A place where you feel guilty for being happy because you know others have not seen their kid graduate high school or turn 21. A place where “friends” and even family members desert you because they don’t want your problems messing up their lives. A place where you can’t feel 100% joyful anymore. I hate the term, “new normal” so much. I know that it’s something people tell newly diagnosed or traumatized folks so that they can hold out hope that their lives will normalize in some way, but, I’m sorry, this is just not normal. People being struck down in their prime, and children no less, getting cancer or dying is just not effing normal!!!!!! And feeling guilty for feeling a shred of joy is not normal either.

Before I went down to celebrate our daughter’s birthday, I slipped a ring back on my finger that I wore for years but haven’t in some time. I bought it while on vacation. The words, “live in the moment” are carved into it. In over 12 years, I have not been able to learn to do that very well. For one thing, I am a worrier and always seem to fret about the future and “what ifs.” I feel jinxed after so many bad things happened in my life and always seem to be wondering when the other shoe will drop. Also, as an “empath” I get very upset by other people’s pain. Sometimes, I have to stop and remind myself that I cannot take on everyone else’s grief whilst struggling under my own. But, you just don’t turn off caring for others when you have a big heart. However, I have to take full advantage of this answered prayer as long as I can. I have to try to live in that moment and soak it up. 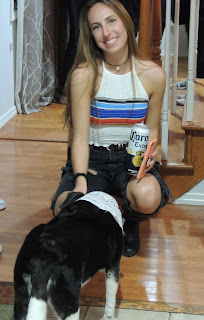