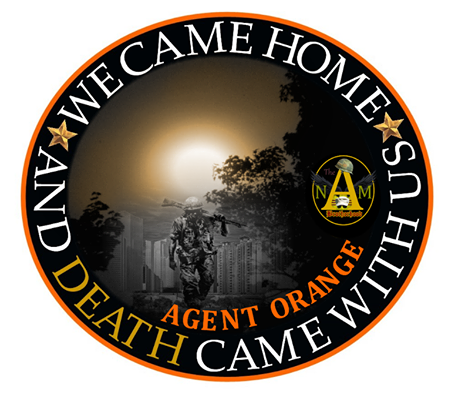 VST YEAREND REPORT – ORANGE HEART FUND CAMPAIGN – CALL TO ACTION
During the past five months we have continued working with the local Veteran Organizations as well as   Vietnam Veterans of America (VVA) local chapters.  There can be no question that the DVA has failed to live by its motto: “To care for him who shall have borne the battle and for his widow, and his orphan.”  This is exemplified by its malfeasance, falsifications and deceptions regarding the true impact of Agent Orange on the children of those “who have borne the battle” in Vietnam.

Let us introduce you to Gordon Lenke, a Vietnam Veteran that was exposed to Agent Orange many times and wounded while serving in Vietnam.  He has a child suffering from deformities caused by his exposure to Agent Orange.  Gordon joined VST as a volunteer and has been meeting with veteran groups and their families throughout Northern Idaho and Northeastern Washington. He has also handled the distribution of hundreds of copies of “FORGOTTEN” to our Congressional Delegation and to all VVA State Presidents.  Gordon also serves on VST’s Board of Directors.

I was asked to address the September Spokane Valley VVA Town Hall meeting.  At the end of my presentation I stated that, “scientists have stated that we must get an Epidemiological Study of Vietnam Veterans completed with independent money and independent scientists because we cannot trust our Government to tell us the truth.”  Many Vietnam Veteran families who attended this meeting had children harmed by their dads’ exposure to Agent Orange and indicated a strong approval of this statement.

At the Spokane Valley meeting one of the veterans suggested we should start a fundraising campaign by collecting “scrap metal,” an idea that was totally new to me.  Therefore, Pacific Steel & Recycling, Inc. (a large Northwest Company) was contacted.  They stated that this was not only possible but they would help us.  Pacific Steel & Recycling has 32 recycling facilities located in Idaho, Washington, Montana, Wyoming, Utah, Arizona, Colorado, North and South Dakota.  Most of the facilities are located in Idaho, Washington and Montana.

The first question is; will this really work and generate revenue?

To answer this question we need to first look at the process:

1.  Pacific Steel & Recycling (Pacific Steel) has agreed to provide the large containers in which metal scrap can be deposited.  There will be no cost for this service.

2.  As the containers are filled, Pacific Steel will deliver new empty containers, pick up the full containers and take them back to the Spokane facility for processing.  There will be one collection location in the Coeur d’Alene area and another in Post Falls where scrap metal can be dropped off.  You will be notified of the locations in a couple of days.  The “Trading Company” has already committed for the Post Falls area.

The next and key question is;  How can this possibly generate enough money to get the Vietnam Veteran Epidemiological Study completed, which is the first step in fixing the problems related to our children being deformed and ill due to the exposure of their fathers to Agent Orange?

Here is the answer.  210 of you called or e-mailed us regarding the Agent Orange Survey.  But for various reasons only 124 of you (3.54% of the Vietnam Veterans in our area) actually took the Agent Orange Survey.  If the 200 of you who called in could get other veterans and friends to join you and contribute up to 1 ton for each of you over the 7 day test period, we would generate $16,800.  Underscore this with the fact that the Coeur d’Alene Press may be publishing an article about our Scrap Metal Program (“Program”) during the seven day test period.  We will also be advertizing.

Now, multiply these dollar amounts by the 32 Pacific Steel locations and assume that the same 6.2% of Vietnam Veterans at each location agree to participate.  The amount generated increases to approximately $537,600 for the 32 seven (7) day periods.  Following the introduction program, metal scrap containers will continue to be placed and picked up around towns throughout Pacific Steel’s market areas.

Is this possible?  You bet it is, and with only the small percentage of Vietnam Veterans that  responded to the CDA Press articles that introduced the Agent Orange Survey.  Has this ever been done before?  NO!  According to Steve Ball, Manager of the Pacific Steel & Recycling plant in Spokane, this is a first and it can work.  Can you imagine what would happen if we got 10% or 20% of just our own Vietnam Veterans to step forward and help raise the money to get the required Vietnam Veteran Agent Orange Epidemiological Study completed?  It would be a resounding notification that we are proud of the service we were called to perform.  It also tells our Government and the DVA that we have not faded away and that our children, grandchildren, great grandchildren will continue to grow.

YES, it is possible.  Consequently, VST has established the “ORANGE HEART FUND” to receive the proceeds from the Scrap Metal Program.  A new logo has been created specifically for this campaign.  The Logo and Banner are attached (the Banner is six feet long).  The 7 day test Program will be launched in Northern Idaho and the Spokane area on January 20th with help from the Coeur d’Alene Press.  Based on the results, we will expand the Program throughout the Pacific Steel Northwest locations, then Nationwide.  If 6.2% of our 3,700,000 Nationwide Vietnam Veterans generate 1 ton each, that equals $18,352,000.

The success of this Program will depend entirely on the number of Vietnam Veterans that are willing to help with physical and verbal support.  That means we need YOU. We must have your help NOW in getting your neighbors and friends to contribute their scrap metal to the Program.  We need volunteers to help at the Container locations – three teams of 4 to man 4-hour shifts.  We also need to develop a “Pickup brigade” to help people bring their scrap to the Container locations.  We can take old washers, dryers, stoves, barbeques, car parts, hardware, all types of scrap metal.   If you know any farmers, ask them to donate.  They frequently have lots of scrap metal lying around.  Large amounts will be scheduled for pickup by Pacific Steel.

In the Spokane area donations can be delivered directly to Pacific Steel & Recycling located at 1114 North Ralph.  Take Freya North to Trent.  Turn Left (West) on Trent, then in two short blocks turn Right (North) on Ralph.  At the entrance simply state that your scrap metal load is for the Orange Heart Fund.  You will receive an “Orange Heart Fund Card” confirming your donation.  We also need a Spokane “Pickup Brigade.”

We have waited over 45 years for our Government and the DVA to get the job done and they have failed, time and time again.  We can get the job done ourselves.  Raise the money needed, hire highly qualified Epidemiological and DNA scientists to complete the research and develop the programs needed to help care for our children deformed by their fathers’ exposure to Agent Orange.

Please let us know that you, and possibly your family, can help.  We need all of you if we are to succeed in getting the care needed for our hurting children.  Call 208-457-1305 to volunteer.

Let’s not wait any longer for our Government and the DVA to keep their promises.  Let’s get the job done without them.  NOW!