HR 2746, the Cancer Coverage Parity Act of 2011, is intended to guarantee that private insurance will cover oral cancer medications on terms no less favorable than inpatient chemotherapy. Yesterday, as a blood cancer patient, I helped the IMF and the LLS bring this issue to five congressional offices, each time explaining the issues and helping the staffer to understand why we care about it. See yesterday’s post.

Why the bill should pass: It’s bipartisan because cancer hits both sides of the aisle, it costs the government nothing because it is directed at private insurers, and it doesn’t require insurers to cover cancer meds – it only requires parity if they do cover them. We hope that several of the congressmen will co-sponsor the bill.

Some insurers don’t like the bill, mostly because it requires them to change something. They’re obliged to be fair, poor babies.

Amy Klobuchar is something else. Of the staffers we saw in the various offices, there may have been just two or three who had a grasp of the issue before we arrived, but Senator Klobuchar knew all about it – even told us a funny story about it! There is no Senate sponsor yet, and I’m hoping that either she or Senator Al Franken will do that. I admit to being a big Klobuchar fan, for a long time, and I even got a hug.

If you noticed, ten of the congressmen and senators were men, but the one woman senator was the only one who showed up in person. Thank you Senator Klobuchar. To be honest, I think that’s more about Senator Klobuchar than it is about gender, but feel free to disagree.

Thank you also, very much, to all of the staffers who met with us and took our message to your congressmen and senators.

Thanks to Christine Murphy of the IMF and George Dahlman of LLS, who did their jobs so competently, and Coles Hull, who guided us throughout, and thanks to Nancy Glick and Stephen Gendel, true professionals.

Earlier in the morning I was interviewed by CNN, preparing a piece about people who are responding to critical issues in their lives (or something like that). The snapshot below shows me with the CNN producer, and with the Potomac River in the background. The piece may air on CNN’s American Morning show, Tuesday, November 8, which starts at 7 am Eastern time. Or maybe 6 am – that’s what my guide says. More about this as I learn more. 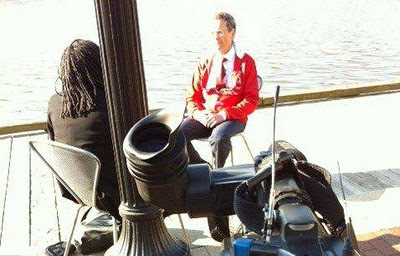 Now we three are off to New York.