One year ago this morning, I received a phone call that changed my life forever.  It’s true what they say about those life changing moments.  I can remember exactly where I was and what I was doing exactly at that moment.  It was a beautiful June morning and I was the only one up in the house.  Flower and I were on the back porch and I was enjoying my first cup of coffee.  Life was great at that moment.  I had just had surgery a week before on a stubborn bump on my chest which at that time was believed to have been a cyst.  I was getting the stitches out that morning. After that I was going to go for a nice run and get some things done around the house.  The kids only had about 3 weeks left of school.  Which meant I only had about 15 more mornings to get up and make the lunches!

After I finished my last drop off coffee, I returned in the house for a refill and to start making all the lunches and prepare for the day.  Flower was waiting patiently for her piece of turkey.  Just as I was slicing the last sandwich, the phone rang.  I looked at the clock and it was only 6:30.  I thought it was the school looking for me to sub that day, as that was the usual the time they would call.  I was surprised to hear my doctor on the other end.  It was my plastic surgeon that had done my surgery on the cyst.  I was due in his office that morning to get the stitches out.  Maybe he was just calling to confirm?  He was very serious on the phone and asked me if Mike was planning on going in with me this morning.  I thought that was odd.  He suggested that he come.  At that point I was getting nervous.  What the hell was going on?  He said that received the lab reports back and that it was not good.  I insisted that he tell me what was going on.  Mind you, I still had the knife in my hand.  In a very serious voice he told me that the lab confirmed that it was a malignant tumor.  Well, at that point, the knife fell and I nearly collapsed on the floor.  I couldn’t believe what I was hearing.  My heart began racing and I felt like I was going to vomit. Was I dreaming all this?  Could this just be nightmare?

I carried the phone up to my bedroom, and handed the phone to Mike, who was still in bed.  I could not even speak.  Mike knew from the look on my face that what ever the call was, it wasn’t good.  I can remember then going in the kids rooms and waking them up for the day.  Holding back the tears I gave them all a big hug and told them how much I loved them.  They all came down for breakfast, Mike and I held it together and only once made eye contact.  The look in our eyes told it all.  We were both in complete shock and scared to death.  What was happening to our lives?  How could this be?  Everything was fine just a few minutes before.  Why did I answer that phone?

I don’t know how we did it, but we managed to get the kids down to the bus stop.  As we waved good bye to them as the bus pulled away, we clenched our hands together.  As soon as the bus passed, we held each other and cried.

The next few hours of that day are a bit blurry to me.  Mike got on the phone with his mom and I made the difficult call to my parents.  We had an appointment with the doctor at 9.  I can remember standing in the shower with tears rolling down.  I had never been so scared in my life.  The drive to the doctor seemed to take forever.  Mike and I barely spoke a word.  We were so scared.  We were too young to be dealing with this?  Hell we have 4 children under the age of 9.  This should not be happening!  When we walked into the hospital, Trish (Mike’s mom) was waiting for us.  Again, no words were spoken, she grabbed us and held us tightly.  The waiting room was another moment that seemed like an eternity.  Mike and Trish held my hands as we waited.  There was nothing to say.  What could we say that was going to make all this go away.

Finally they called me in to the doctor’s office.  The three of us walked in and took a seat.  Dr. Chatson walked in.  He went over the lab results with us.  At this point I could see his mouth moving but I couldn’t quite make out what he was saying.  I was in a complete daze and could not comprehend a thing he was saying.  What I can vividly remember, is how sincere he was.  In fact he had tears in his eyes and he looked at me and said, “Now you are a cancer patient.  You will fight this and you will be stronger because of it”.  He gave me a hug and then he left the room.  You could tell that he was just as shocked as we were.

I should mention that this “cyst”  had grown back in November/December of 2010.  It was causing me discomfort and I had it removed right before Christmas 2010.  The lab results should that it was in fact a cyst and that it was normal.  So when it grew back, no one was worried.  We knew that cysts can grow back.  I had already had it tested and it was fine.  So how is it that now it came back as a malignant tumor.  I was still convinced it had to be a mistake.

Well, jump ahead exactly one year later.   I am once again the only one up drinking my coffee.  Only this time I am stronger, healthier, and confident that I am going to beat this.  In fact, I have been waiting for the perfect opportunity to make an announcement and I think now is the time.  I am currently training for the Boston Marathon with my lifetime friend Suzi.  We are going to run the Marathon next April as part of the MMRF Endurance Team!  We have been running for the last couple of months and actually ran 13 miles this past Tuesday.  To get us ready for Boston we are going to run the Bay State Marathon in October.  Mike is helping me put together a team to help us raise money.  We are going to be forming “Jeanie’s FEAT”, Fitness and Endurance Team.  FEAT as in a notable act of skill, endurance, imagination and strength.  Mike came up with the name!  We are super excited to get started. I feel so fortunate that today I am strong.  I plan on running every day I can and to raise money for Multiple Myeloma at the same time, well that is the icing on the cake!  If any one would like to join our team please let me know.   Mike and I are putting together our website.  So if you are active and like to participate in races from cycling, to running to triathlons consider joining our team.  I’ll hook you up with some cool gear and you can feel good about what you are doing.  You will really be making a difference.

I no longer see my cancer as a death sentence.  It has truly changed the course of my life and of those close to me.  Yes cancer sucks!  The stem cell transplant sucked!  Chemo sucked!  Being bald sucked!  But you know what, I came out the other end stronger and better.  Cancer is no longer holding me hostage.  Yes it is true, it may come back.  I may get real sick again.  And it may get harder and harder to fight it.  But I will be strong and both physically and mentally with my gloves on ready to give the fight of my life ready to dominate! 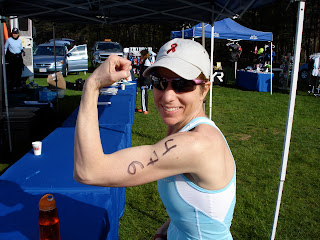 To mark this one year anniversary, I toast (with my coffee) with a smile on my face.  Here’s to enjoying every moment of life!  As I have experienced first hand life can change in just moment or with just one phone call.  Get out there today and live it, love it and have no regrets!