Hello everyone – I do hope you all have had a lovely few days.
Our Christmas was mixed.
FL was pretty much out of it on Christmas Eve and Christmas Day.  He wasn’t eating much, was sleeping almost constantly, and could not hold a conversation when “awake”.
A wise and medically-qualified blog-reader suggested that he might be over-opiated (taking too much morphine) but it was hard to refuse painkillers when he was clearly in pain.  I let myself be guided by his demands, responding as if to a young baby crying for milk.  He would not agree to reducing his dose.
But then something changed…
On Boxing Day, I went to fetch the hot water bottle and discovered it was lying in a puddle. It was not leaking.  FL was dozing on his chair, and I was about to confront him, when he woke on his own and said he had something to tell me.  He thought he might have had an “accident” and could I help him change his clothes and have a wash?
Ha!  He didn’t have to ask twice!
I gave him a thorough going-over in the shower and a new set of clothes.  He was properly awake for the first time in ages and I put it to him that his loss of control was due to an excess of morphine.  He agreed to try a smaller dose that night, and again the next morning.
So yesterday, we were treated to an entirely more “present” FL.  He still had a few sleeps, but in between he was initiating conversation and even picked up his notebook for a while.  Wow!
I am not sure we have got the balance quite right yet, as he had to get up early this morning, in some pain.  However, I am clear that this is the key:  if we can just get the painkiller regime sorted out, he will be very much happier and able to participate in life. 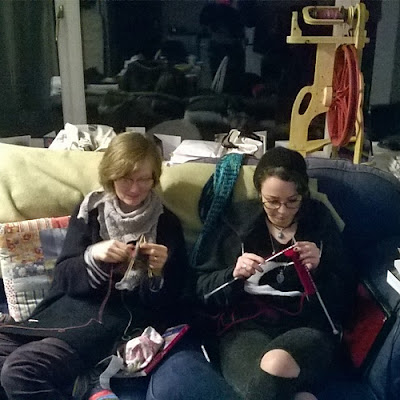 In knitting news, I cast on a pair of socks on Christmas Day, using my Opal Klangwelten yarn in a red / green / charcoal/ white self-patterning colourway.  I have reached the heel flap and might put it away til next Christmas:  it feels wrong to be knitting it now.

As you can see, The Girl has been learning to knit – yay!
This is part of her homework from college.  She is on an amazing course which I must tell you about one day :)

I have also been having a ripping party:  my Monte Rosa  cardigan project has been frogged and the yarn stored away until a better inspiration strikes.
Ditto my Talia socks.
I am about to reconsider my Sunwalker Shawl.  I am not happy with it.
And we can’t have that.
I intend to start the New Year with a fresh project plan.
Now there’s a fun activity for today!

That, and spinning – I should finish my first full braid of fibre today – woo hoo!

Let me leave you with another picture of The Girl, and the Qwist hat and mitts set I made her for Christmas.
That pompom is da bomb! 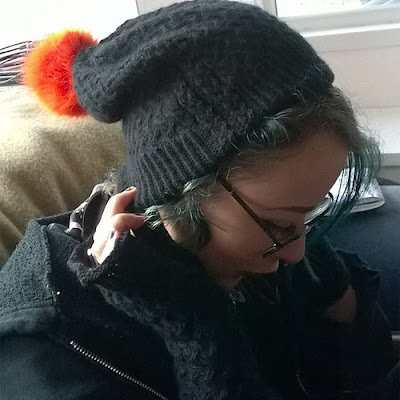