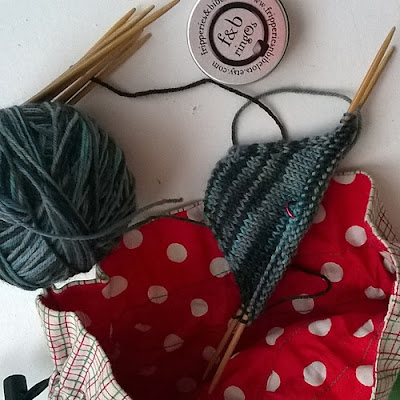 On the first day of Christmas, my true love gave to me…
a day in the Waiting Room?
How romantic!
But at least I had my knitting :)
I have decided to join in with the Adventure Scrap Sock knitalong, hosted on a Finnish knitting blog, by Neulisti here. 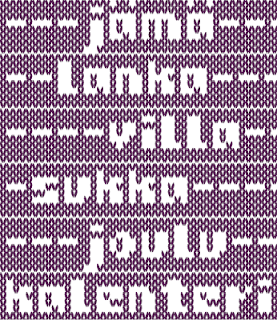 If I was feeling really adventurous I would be knitting in Finnish.  But that would be one step too far.  I recognise the word for “sock” and then it all goes a bit (partridge in a) pear-shaped (tree).
So English it is!

It is a toe-up sock, which I find challenging.
The premise of the knitalong is that the pattern builds up according to the day of Advent, so today I had to knit one row.
This is going to suit my schedule pretty well I think:  by Christmas Eve I should have finished all my gift-knitting, so will be free to dedicate myself to 24 rows of self-indulgence and a mince pie – woo hoo!

It is a free pattern, so I don’t feel guilty telling you about Clue One.  I had to work one row in the colour corresponding to the time of day I started knitting it, according to this colour wheel / clock:

As you can see, I started Clue One at 3.30pm – bright sunshine yellow.
I can tell this is going to be lot of fun! 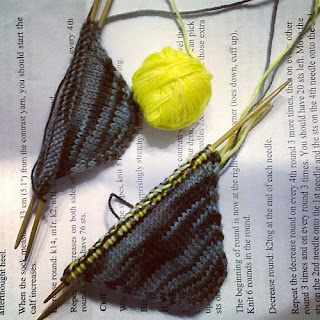 FL’s Freelite (Myeloma) score rose from 170 in September to 373 in November, which is bad enough, but worse when you look at the ratio of kappa to lambda which had soared from 26 to 300.
His Haemoglobin is down to 86, which makes him tired and breathless.

We saw a doctor we hadn’t seen since she went on maternity leave a year ago.  This was a bit frustrating because she had to catch up before we began.

What was interesting was that she looked right back to FL’s diagnosis in 2007.  His myeloma was at a similar level to now, and his symptoms were also very similar:  centred on a pain deep in his chest.  Looking at FL’s most recent x-rays, she thinks it is likely that the myeloma has returned to attack the same point in his upper ribs.  She is going to enquire about radiotherapy.

I wonder if the Consultant threw her at us in the hope that she would come up with a bright idea:  a fresh pair of eyes?

She certainly tried really really hard to help.  She was lovely.

But she was not impressed that the Consultant had not properly explained that FL’s only options now are palliative:  increased pain relief and blood transfusions.
He will have both, thank you.
She prescribed stronger, morphine-based painkillers.
His first blood transfusion is in 2 weeks.

This evening it became clear to FL what this means.
He is sad that he might not finish his book.

Counting down the days to Christmas feels uncomfortable in these circumstances.
But I suppose at least there is a pair of crazy happy socks to look forward to.
I am hoping to Instagram or blog sock-progress every day, to keep me motivated.
Onwards!