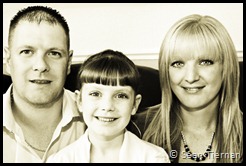 Before I start speaking about old age, I would just like to mention something that happened when I arrived at the hospital. I pulled up in the car park and reversed and Charito say’s ‘There’s Chris’ van’! To my my surprise, sure enough, parked a few yards away was my next door neighbours van with the distinctive yellow and blue logo of CJS Couriers. I was surprised to see it their and was worried that one of them (Chris, Jodies or Sophie) might have hurt themselves as it was parked very close to Accident and Emergency. I called Chris on his mobile to find out if they were ok and sure enough they were fine. Chris was in the Van so I walked over to speak to him.

It was a scheduled appointment for Sophie as an outpatient. She has had problems with her Tonsils as they are very large, but she is OK. I saw Sophie later on when we got home and she tried to show me her tonsils while at the same time navigating a polo mint in her mouth. So everything was OK, but it was worrying to see someone in the hospital when you don’t expect too, you always imagine the worst!

I just realised as I was writing this that the title is Old age and then the first thing you see is a picture of my neighbours …. Jodie is bound to tell me off for that if she see it.

Back to the main title theme .. After arriving at the hospital and then settling down in my chair on the ward, there were a few new faces again. It turns out that their were a few people that just come on the ward twice a year for some medication to be administered, I’m not sure what it was or what was wrong with them, but the point is I had never seen them before.

There was one man in particular that must have been in his 70’s that sat opposite me, who’s name I think was Fred if I remember rightly. He was hooked up to a drip similar to me and was waiting for some drugs to be made up. He was quite chatty and had all of his senses, I can’t say that about everyone that comes on the ward and I don’t just mean the patients! One of the things drew my attention to Fred was that when he arrived he asked one of the nurses if it was ok to plug in his laptop computer into the power socket. It took the nurse by surprise a bit I think as she commented on clever he must be to use a laptop as her mother hadn’t got a clue. I must admit though I was surprised as normally most people of his age wouldn’t have a clue, I don’t mean that in a derogatory way, it’s just that they haven’t used the technology much as it moves so quickly that the older generation haven’t got around to learning the new skills.

Fred on the other hand seemed to embrace it. After setting in and him sending his wife and family off while he waiting patiently, I got to know more about him. Not only was in waiting for whatever drug he was waiting for, but he also had