I was raised in a family where you don’t use the h-word and we share that same value with our kids. BUT, on Saturday after my Wolverines fell to the undefeted Buckeyes, it seemed to be the only verb that could come close to describing the feeling in the pit of my stomach.

I know, I know…it’s only football and more so than ever it is over marketed and a gross sign that Americans have nothing better to do than cheer on 19 year old kids with a veracity that could solve world hunger 7 times over.

The beautiful thing about this rivalry is it reminds me how two football foes make each other better given their shared goal to win a championship. Through taking on the foe of Myeloma, some of my dearest friends who are helping make me better and stay on track to kick cancer and dominate life are those who saw nothing wrong with parading Jim Tressel around the field, as if he wasn’t the reason that their 12-0 season means very little to ESPN college football commentators.
It is the passion these Buckeyes have for their team that I find them transferring to other worthy causes that can make a monumental difference in lives of others. They will paint their face, drink their kool-aid and never lose hope in their Buckeyes. It may annoy many of us who don’t understand how invested someone can be in a sport they never played or a school they didn’t go to, but I have learned to embrace that passion of some Buckeyes, who have had a deep impact on my life.
Below is one of my most memorable photos of the year. It includes my good friend Barb, a diehard Buckeye from Columbus, who’s mother passed away with Multiple Myeloma this year. She paced me through the Chicago half marathon so I could reach my goal of finishing in 2 hours. Believe it or not, I crossed the line at 2 hours and 34 seconds. She not only has become a running coach of sorts for me, she has also raised close to $20,000 for cancer research at..guess where??…The University of Michigan Comprehensive Cancer Center of all places. She doesn’t allow allegiance to her football team get in the way of advancing research towards a cure. She has been has faithful in my journey as she is with her Buckeyes in the fall. For that, I am thankful. 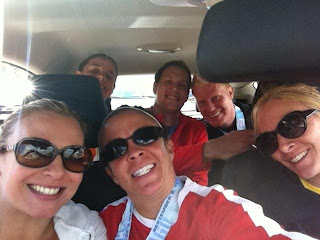 Before I get targeted as a heretic by the Michigan faithful, I will add that three of the people in the car are Michigan Alums who also ran the race with me and assisted me in my domination of the race. So the hatred for Ohio has in some cases turned to love, but I still think often about stiff arming Buckeyes. 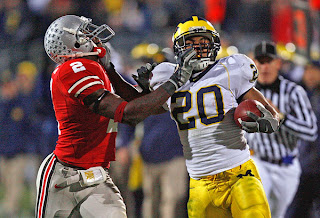