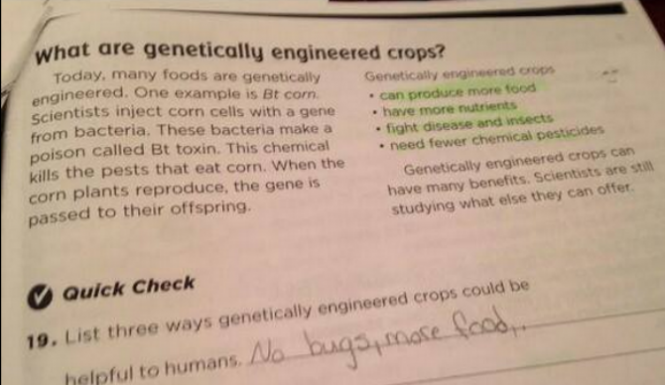 Over the last couple of years, some parents have become cautious of what foods to feed their children, especially with the discovery that genetically modified (GM) foods may be hazardous to a child’s health. The Inquisitr has assisted these parents by reporting on the latest pertaining to GM foods, which could start as early as infancy with GM baby formula and continuing to elementary school with lunch milk containing GM bovine growth hormone (rBGH).

As a result, cautious parents are reporting pros with their children on GM-free diets, and no-GM product businesses, such as Chick-fil-A and Chipotle, are prospering.

However, parents aren’t the only ones who assist in a child’s upbringing, though they should be the most important. Following the old phrase, “It takes a village to raise a child,” teachers accompany in a child’s development, eight hours a day, five days a week, on average. Sometimes, what they teach is in defiance to a parent’s lessons. In this case, a parent is upset that children are being taught genetically modified organism (GMO) propaganda in sixth grade.

According to AltHealth Works, Dawn Jordan, a parent in Missouri (Monsanto’s home state), was shocked to find a section in her niece’s science book, Science: A Closer Look, dedicated to GMOs, specifically GM crops. The section touted four positive bullet points about GMOs which are listed below.

Of course, none of the negatives discovered through scientific testing and research have been included in the textbook. Also, the teacher assisted in the GMO agenda by writing in an answer for one of the questions that asked children to list three ways GMOs could be helpful to humans. Dawn Jordan provides a statement on the teacher’s assistance in promoting GMOs.

“When my niece sent me her homework, I noticed her teacher wrote ‘no bugs, more food’ as a suggestion to her as to what to write about… which disgusts me that a teacher in a public school system has no knowledge whatsoever on the actual truth about GMOs and is merely doing what she is told, without proper research first.”

In a follow-up article by Buy Non-GMO Seeds, it reports that the textbook is published by McGraw-Hill, and is being distributed to schools across the country. It is unknown how many of the books were actually distributed.

This is not the first time Monsanto or another pro-GMO organization or entity has influenced the children of America to support their agenda. Monsanto funded the production of a coloring book titled Look Closer to Biotechnology that was riddled with pro-GMO propaganda. A heavily-biased activity book that listed alleged positives of GMOs but none of the negatives would have been distributed among the public if it weren’t for activists. Summarized, this isn’t the first time Monsanto has attempted to manipulate the minds of children in their favor, and it won’t be the last.

To all you parents out there, now that you’ve read of Monsanto’s agenda of teaching your children about GMOs in their favor, what are your views? Do you find Monsanto and GMOs to be an issue best stopped through education, or are activists just paranoid?