We went next door for a night out last night. It was Chris and Jodie’s birthday party, although their actual birthday isn’t for a few days. It’s been the first time I’ve actually been out and had a drink, yes wine, for several months, at least since I started the second lot of chemo. I don’t drink at all while I’m having treatment, so I thought I would take advantage of the few weeks off that I have had. 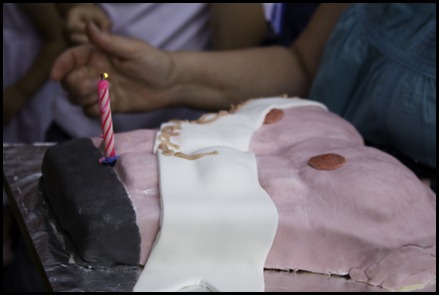 We had a lovely time, although I didn’t have the energy to carry on till very late in the morning as we used to singing on the Xbox. I only managed till about 12am and then my body said it was time for bed. They had two lovely cakes made for them. One of a mans Chester and one of a woman’s chest. I preferred the woman cake for some reason. The cake was the nicest sponge cake I have ever tasted and Charito agrees with me. It was so nice that I managed to scrounge a large chunk of it this morning of Jodie and I’m in fact eating it in the middle of writing this. mmm yummy.

This work is licensed under a Creative Commons Attribution By license. My Life with Myeloma http://mylifewithmyeloma.blogspot.com Sean Tiernan