Recently, just prior to my getting pneumonia, my wife and I traveled to Olympic National Park in Washington State. Two friends from Seattle joined us for the trip. We stayed together at Lake Crescent Lodge, which is located just inside the east boundary of the park.

Our history with national parks is long and strong. Growing up in California, my family vacationed annually in Yosemite National Park. Later, as a college student, I worked there during the summer months. Then, after finishing with school, I decided to see all the seasons. I got a job at the Wawona Hotel, which is located inside the south gate of the park. A small pocket of private land with vacation homes and tourist accomodations exists adjacent to the hotel. I found a small cottage to rent and stayed five years.

My wife worked as a waitress at the hotel. She had followed her own unique path to end up at Wawona, where we entered each other’s orbit. With the blessing and oversight of the winter caretaker, we were married there on February 1st of 1975. 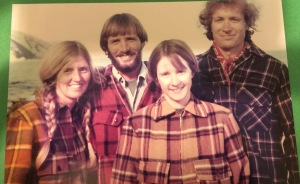 Soon thereafter, we immigrated to New Zealand. During our 2nd year there, we quit our jobs. I rebuilt a Volkswagen van and we set off on a six month adventure through the north and south islands.

On Thanksgiving week of 1976, we stopped at Tongariro National Park, a volcanic wonderland in the center of the north island. We hiked the trails of three active volcanoes, Mts. Ruapehu, Ngauruhoe, and Tongariro. We used the park’s campground as a base for our activities.

And, this is where we met our Seattle friends. As fellow Americans, the holiday drew us together. They were hitchhiking and we had a van. The joke is that we picked them up and have not been able to get rid of them.

We traveled together for the next several months. Periodically, we went our separate ways with the agreement to rendezvous elsewhere. During these travels we bonded over the rugged beauty of NZ. We backpacked together, endured rainy periods, and shared long nights of card games in the country’s campgrounds. 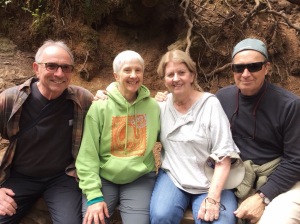 2016. Atop Marymere Falls. Kevin, Marilyn, Arlene, and me celebrating 40 years of friendship.

Accordingly, on our visit to Olympic National Park, we spent time much like we did years ago in New Zealand: day hiking, eating good meals at the lodge, and playing cards by the fire at night.

This week, as our country celebrates the centennial of America’s National Parks, we are making plans to visit Glacier National Park next year. Once again we hope to share the heritage of our preserved parklands and a friendship nurtured by their beauty.