On the days when I feel like there is an improvement in my mental capability, I remember that my mobile phone device is full of  blogging material of questionable quality. It’s a responsibility, for I then feel tied down to telling what a lesser person would deem an uninteresting story, whilst simultaneously knowing that I personally, will feel instantly better for sharing and recording, in a way that can never be taken back, whatever the particular shit myeloma has thrown at me during x amount of time between blogs.

As the earth has continued to rotate, I gave at least managed to hide the evidence of what could form a blog in my iCloud account instead. I guess today is one such day, I have some sort of energy, except, I started writing this blog about ten hours ago and so far, it looks absolutely nothing like I anticipated it would when I started morning. I am fairly certain for example what this will be the only time I mention NHS meals.

Of late, My Myeloma stories are overflowing in my virtual world and my actual mind, and not on my blog. Few people know just how many days I have spent sleeping in a room occupied by strangers or how many times I have been put to bed. There are times I am so confused by it all, that the easiest thing to do to manage it, is to fall asleep and forget it ever happened. I am not even sure what my reality is 100% of the time. I would have no clue at all if I didn’t attempt at least to try to maintain a record. I need a record of this. I want a record of the times I fell asleep mid sentence, or when I canceled plans with my friends and I cried myself to sleep because I saw no end in sight. Hell, I even want a record of my most recent and nightly nightmares.

Right now, I’m experiencing something new almost daily, and yet I’m not fully documenting it, as I had once documented before, because the something belonging to my sister that entered my body three weeks ago or so (see I do not even know the day) seems to be killing off all my two autos later, surviving, brain cells.

I have had four weeks of treatment,and of course we are running very close to a certain three year anniversary, so there are no shortages of tales to tell.  I want to tell them but it’s getting close to medication time.

Almost everything I have experienced since my allo commenced is ‘blog newsworthy’ (people write blogs about Stephanie Meyer’s arm hair right?), I just haven’t quite worked out where the energy is to tell you about it. Know I plan to, it might just come later than I actually experienced it.

I used to think that a late blog would be something of a disservice. If a blog was written out of anger for example, like the half written one I found the other morning, time gives me the ability to calm down, to compose myself, and omit the need to rebuild any of those metaphorical bridges that might have been damaged mid rant. On the downside, by waiting, it takes away that raw emotion, the raw emotion heightened by my inability to eat raw foods, and I feel a little bit like I am making things sound easier than they are. I feel like it makes me sound more composed than I am, when I am really not. Not only that, less blogs I dramatically reduces my site’s statistics and my ego likes the notifications.

If there is one thing I have experienced a lot of since I started frequenting St Bartholomew’s Hospital everyday, it is raw uncensored emotion. Perhaps the fact I am too tired to blog is stopping me from writing something I would regret at a later date. It’s not a lie, it’s just presented a different way. That is what I keep telling myself when I look at my ever growing list of half finished drafts.

I cannot give you any specific examples, for that would really negate the need of this temporary notate bene. Hypothetically, however, I might have written something negative, something along the lines of;

There is still time to jinx this procedure by talking about it now and I most definitely, most adamantly, most whole-life-depends-on-it-do-not-want-to-jinx-this. But and that is a start a sentence with a capital ‘B, But, I do not like Saint Bartholomew’s Hospital.

And then the hypothetical thought better of it… Like I said, I did not write that down, those thoughts are imagined. If somebody did hypothetically wake up one morning and write that down before they even got up to go to the toilet, I am sure they had good reason for doing so and it wasn’t because she felt the nursing assistance was slightly rude that morning… Hypothetically. Similarly, so too, could something like this have been said, despite me never actually joining any of these words together to make a cohesive sentence;

Every time I have experienced Red Thumping Rage over the last 17 days, I have felt like a teenage brat in great need of a reality check, a slap round the face, a smidgen of gratitude and a slow play replay of the NHS part of the 2012 Olympics opening ceremony.

I could even have imagined images of clutter or me sleeping. Maybe, like I said. I do not know. The negative portrayal of a scientific marvel does not sound like me. 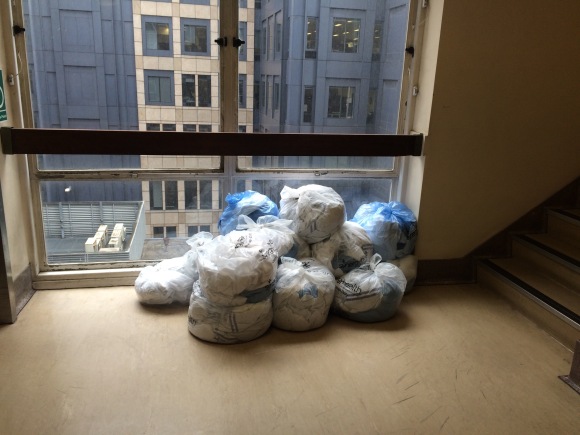 I love everything remember? I think my care is great. I love talking about myeloma and myself, and I cannot wait for the time when I have the effort to do it properly, with a proofread. Until that point comes back, we get what we get.