My dad died a few days ago, a wonderful gentleman, age 100, as sharp as anyone, still with more friends than most of us could ever hope to have. He was very handy and quite smart, and all his life he helped anyone who asked, with no expectation of a return.  He had ten visitors on the very day that he died. 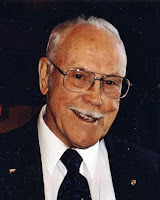 He was also my best fan, apart from my sweeties, always asking for the itinerary of our next marathon trip, wanting to know the results, and appreciating the occasional news story about his marathoner with myeloma. His loss leaves an emptiness for many people and for me especially. I love you Dad, go with God.

IgG was 1070 mg/dL, essentially identical to last month’s measurement of 1060. M-spike was 1.0 g/dL, down from 1.1 last month and as low as it has been since February. That’s good news – the myeloma appears stable.

Maybe, though, something else is happening. I have IgG Lambda myeloma, meaning that the naughty cancer cells produce some extra Lambda light chains. The Pomalyst has kept those within the reference range most of the time, but they have been creeping up slowly over the last eight months or so, now higher than they have been since the Pomalyst treatment started in 2008. Furthermore, the Kappa light chains have also been creeping up, topping their reference range this month for the first time ever. The ratio is still normal, but both Lambda and Kappa are above their reference ranges and I don’t know what that means.

Last month I asked Dr L about this, and she suggested that it may be due to kidney backup in older men with benign prostatic hyperplasia (BPH), which is a problem that I do have. Light chains in the blood are cleared by the kidneys. This theory does not explain why the chains are increasing, however, because my BPH has not changed perceptibly over the eight months and other kidney function indicators, such as creatinine clearance, have not changed either.

This month Dr YLH suggested that the increased chains might not be junk from the cancerous cells, but might be real chains, an important part of the immune system, responding to my infection – I have a cold. I like that theory, which implies that the chains will be back down next month when the cold is gone, but it doesn’t explain why the levels of both chains have been rising over eight months.

Just today, at a seminar hosted by the International Myeloma Foundation, I spoke with another very knowledgable myeloma specialist who assured me that he had seen this before in people who were taking IMiD’s for long periods, and that was not predictive of anything. Just a slightly-interesting artifact – I could ignore it.

I’m a worry-wart though, somewhat suspicious of such an easy answer, and I don’t know what to think. This month’s blood draw was just four days after a marathon, but next month’s will be five days after a marathon, so if the light chains are affected by running I won’t know for two months. Meantime I’ll try to take the doctors’ advice and forget about it.

On the other hand, if you have an idea, I’m all eyes.

Last month my blood pressure at Mayo was 155 over something, I can’t remember the lower number. Dr L suggested that I get a monitor and keep track of it. After a little research I ordered an Omicron BP 652 “Automatic Wrist Blood Pressure Monitor.” After keeping track off an on for most of May, these are the results for 57 readings at varying times of the day:

Average heart rate was 45, which is normal for me. I suppose that the BP readings are on the edge of high, or more, and maybe I should talk to my primary physician to discuss them.