Skip to content
My darling Micky
Today we are here to say goodbye and at the same time celebrate your life. We may have met a bit later than most, but from the second we started talking to each other, I knew that we would be friends for life, and we were. I never expected to meet someone who I felt would complete me the way you did, you were someone who I never had to explain myself to. You were the missing piece of my jigsaw, and I was yours. I couldn’t possibly count how many hours we spent talking in the garden until the early hours or the number of times that we laughed until our sides hurt. We had so much fun even during ill health.
Remember the time we were on our way back from our holiday in Italy, we didn’t want the holiday to end and so we drove to Broad Street in Birmingham and got our party clothes out of the suitcases. Off we went to Brannigan’s nightclub where you went into “play up” mode. You started talking to a hen party who all had Dick Emery vicar style teeth in. I came over and said, “don’t worry, I’m his care in the community nurse!” Everyone screamed with laughter, including you and me.
We went snorkelling in The Blue Lagoon in Turkey. We found a small octopus in the shallow water and followed it around until we were so cold, we could hardly move. When we got out, we discovered we had been in the water for four hours! You loved Turkey with its heat and people. You obviously made an impression as the staff remembered you, every time we went.
Even when you were going through your first round of chemotherapy you had the nursing staff in stitches. When your potassium was up, you dressed up as a tomato, a banana and potato (all high potassium foods). When Liz was promoted from staff nurse to sister, you got me to make you a nurse’s watch and I sewed white tape onto a navy-blue top to mimic the sister’s uniform. Of course, the best laugh of all was what you did on the day of your last treatment. You decided that rather than buy chocolates or a thank you card that you would sing “You’re simply the best” as Tina Turner. Fishnet tights, leopard print dress, blond wig and high-heeled shoes. The consultant saw you from afar and legged it off the ward!
Despite my devastation at your loss, I realise that I am so much richer for having known you. Your kindness and care for me extended so far, that you even made sure you had bought my birthday present and card before you left me. I will never forget you; I don’t think anyone could, you were always so colourful and larger than life. 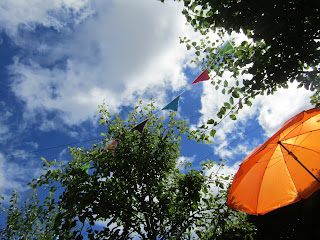