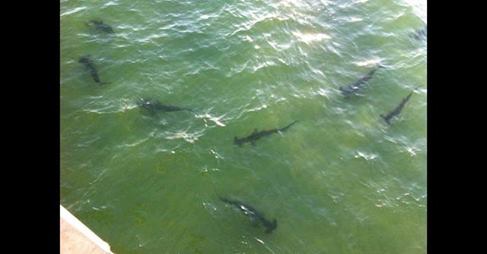 There have been more sightings of hammerhead sharks off Panama City Beach.

National Oceanic and Atmospheric Administration (NOAA) officials said they spotted a school of the sharks at the county pier this weekend, a lot like the group viewer Tina Rudisill snapped a picture of last week.

Research biologist Dr. John Carlson said this is not uncommon as the Gulf of Mexico is currently very clear and more people are getting out on the water. As for why they’re coming so close to shore, he said that’s natural instinct.

“They’re just looking for bait. They’re looking for food, like everything else. Some of them may be on a migratory pathway, basically the same pathway that the cobia are following right now. They’re moving along shore, down the edge to the west side of Florida,” Dr. Carlson said.

Carlson suggests people don’t swim at dusk or dawn when it’s harder for both people and sharks to see in the water, near people fishing as the bait attracts sharks, nor with jewelry on because it can look a lot like the shiny fish sharks eat.

He also added it’s best to shuffle your feet while walking in the water because your chances of stepping on a stingray and being stung are far greater than being bitten by a shark.