On the needles:  Pike’s Mitts for The Boy.
I treated him (OK, myself!) to a skein of Brooklyn Tweed Shelter, the yarn for which this pattern was written by the wonderful Jared Flood.  This is the Button Jar colourway.
I try to use British wool wherever possible, but I was intrigued by Brooklyn Tweed.  I thought it might be like Rowan Scottish Tweed, but it is actually much much softer.  It has an almost soapy quality, which gives it a very muted, matte appearance.  Understated, you might say.  Highly suitable for man-centric knitwear.
Knitting these is Cable Boot Camp.  I have never before been asked to deploy two cable needles at the same time!  It didn’t help that there was an error in the chart code on that wide left hand cable.  I didn’t understand what was going wrong at first, so the first big twist is faulty.  Shrugs.
T3Bp and T3Fp are opposites of each other and the chart code has them the wrong way round.  Once I learned to read the chart without referring to the code, I saw what was wrong.  The chart itself is correct.
If you fancy knitting these yourself, they are a whole lot of fun.  No sarcasm intended!  I am viewing them as a training project before I set to work with my Japanese knitting book. 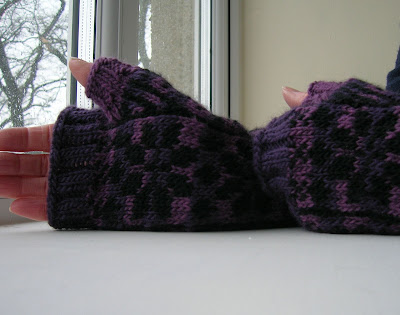 I finished my Lotus Eater Mitts.  A doddle in comparison, even though my colourwork is a bit dodgy.  I tried to be consistent with my stranding, but there are a few awkward vertical strands, where I failed to weave in the spare yarn for the stripes.  I trust the recipient not to turn them inside out and gasp with horror, even though she is a knitter! 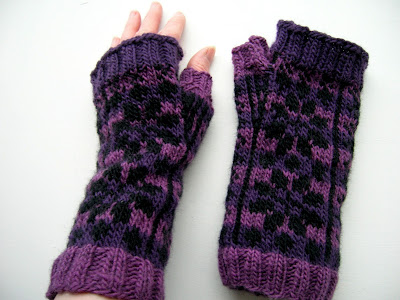 Today is has snowed and it has rained.  I didn’t make it to the office on Thursday or Friday.  After FL had my winter tyres fitted, my car’s electrical system went crazy.  The dashboard is a blaze of fairy-warning-lights and my headlights aren’t working.  This happened two years ago under the same circumstances, so the jury is out on whether it is due to FL’s driving or the cold weather.  Either way, I am now reliant on him for lifts until we get it fixed (Tuesday).
I am effectively housebound with a pile of knitting and library books.
It could be worse!