I got a phone call Wed. night from my cardiologist,  just as I was getting dinner ready. It was not a great
conversation. It seems that arrythmia that put me in the ER a few weeks ago, was not as benign as was
originally thought. He got the EKG strips from the EMT’s that treated me in the ambulance, while I
was right at the curb, in front of my house. My heart rate was 250 bpm. I knew that but I don’t think he believed it until he saw the proof, himself. Yes, that’s about 4 beats per second and NOT a nice feeling, I can tell you. My doctor seems to think I have an electrical short circuit in my heart and it has to be repaired. He said, “you could keel over from this.” Just freekin’ great. Not enough that my kid has one parent with a life-threatening illness, she hit the jackpot and has two. I had to make an appt. with an electrophysiologist for the 15th and get all my heart-related medical records sent to him. The good news is that I can have this “ablation” procedure done and it will be cured. I will not have to spend my life worrying that this could happen again. It won’t. But, I, of course, am very nervous. They go into your heart with a catheter and map out your electrical circuits and find the one that is not being a team player and cauterize it. I really don’t have much of a choice, so I suppose that takes a LITTLE bit of the angst out of it. My doc said I cannot walk around with this. (Gosh, I really wanted to tell him to ZIP IT.)
He said I’ve probably had this since I was born, and what I am praying for, is that this is what has caused my irregular heartbeats all along, and the fainting spells that changed the course of my life, and that all of this will be cured by this procedure, if in fact my doc is right and this is what it is. This phone call put me into a funk, but I am going on with things. I’ve gotten much better, over the years, at dealing with things. I used to worry myself sick, and many times it was for nothing, false alarms, etc. Now, I just try to get on with it and let the pieces fall into place. Maybe, it’s just a “giving up” of the notion that I am in control. I said to myself the other day, “if God intends to take me, there isn’t a darn thing I can do about it.” I sure hope that is NOT his plan though and I do have to take care of whatever this is so I can stick around here. I looked up the practice that my doc recommended on the internet. There are 4 doctors and only one was given high praise by patients, in a survey. When I made the appt. the woman asked me which one I wanted to see. I learned a long time ago to ask nurses, or a doctor’s employees, which one they themselves would use because they KNOW these doctors. They know who they would trust with their health and are usually happy to share that with you, if asked. So I told her, “Look, I have a husband with cancer and a 13-year-old. Checking out is not an option here. Which one of these doctors would you use if you were in my position?” Without hesitation, she said, “Dr. “R”. That is who you want to see.” That is the doctor who got the great reviews from patients too. So it’s off to Dr. R, who I hope will be gentle with this frightened patient.When I told Tim what my cardiologist had said, after getting off the phone Wed., he said,
“Just another day in paradise at our house!” Now, just like everything else, he has put it out of his mind and was just saying the other day, “we should go away for a few days on Memorial day weekend. Maybe we’ll go here or there” etc. I was like “HELLOOOOOOO, remember me?, I may be having a cardiac procedure around then!!!!!! You think I want to take a trip right now, with what’s going on?” I tell ya, I’m just invisible around here. Last night, I went to bed and he picked Liv up at 10 pm. The two of them were laughing and yelling downstairs and woke me up.They kept it up and I finally yelled down, “you’re kidding me right?!” Tim was like, ” I didn’t know you were asleep.” No, he just came up a half hour before and I was in bed. WHY IN THE WORLD would he think I was asleep and they should refrain from yelling? Some days, I feel like nothing but a pack mule around here. 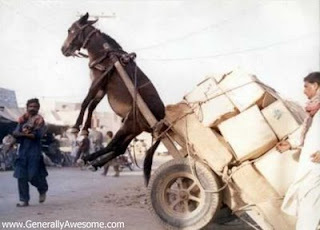