After years of work by scientific public interest organizations such as Center for Food Safety and governmental bodies such as the United Nations, consumers around the world are becoming aware of the dangers of industrial, chemical-based agriculture. The most legitimate science and research bodies recommend turning toward organic and sustainable agriculture, shunning genetically engineered (GE or GMO) products and the chemicals they are designed to promote. Yet despite the U.N.’s assessment that sustainable agriculture is the way to feed the world’s growing population, U.S. government agencies continue to support the biotechnology industry and its pesticide-promoting crops as the path forward. But the message is failing — even with the backing of the U.S. government and a barrage of advertising from companies like Monsanto.

With the growth and power of the food movement, corporate giants are beginning to take action. According to news reports last year, Monsanto “[shook] up its senior public relations staff, upped its relationship with one of the nation’s largest public relations firms and helped launch a [new] website…” After decades of employing a “block-us-and-we’ll-sue-you” approach, Monsanto recently began an intense makeover PR campaign: popularity by association.

Monsanto is cozying up to the reputation, authenticity and wholesomeness of family farmers — and hoping the all-American nostalgia many associate with the small scale farmer rubs off on them.

During the Super Bowl, key media markets saw Monsanto’s “It Begins with a Farmer” commercials, which were intended to demonstrate that the company shares the same values as family farmers and the consumers they feed and clothe.

In reality, Monsanto is no friend to the family farmer or the communities they live in and support. In fact, Monsanto (and other chemical companies like Dow Chemical, Syngenta, BASF, Pioneer/Dupont, and Bayer) have forced small farmers into a dying breed. The cost of industrial agriculture forces farmers to get big or get out. This is particularly true of GE herbicide-resistant seeds, which USDA economists tell us have contributed to increased consolidation of farmland in fewer hands.

For those farmers who survive, profit margins are smaller due to the high cost of inputs. Genetically engineered (GE or GMO) seeds have dramatically driven up per-acre seed prices ever since they were introduced in 1996 (see chart below). 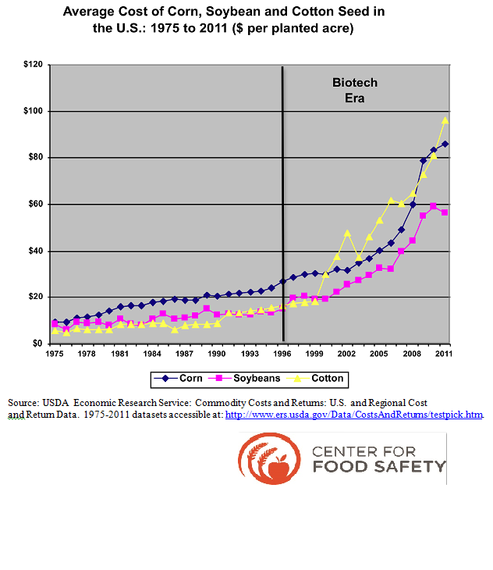 Add to this the rising costs of chemical fertilizers and pesticides (including herbicides) in this “one size fits all” agricultural model where chemical companies make out like bandits on the sale of seeds and chemical inputs. In the end, family farmers get squeezed out by the mammoth farms enabled by biotechnology.

Monsanto imposes contracts and wields patents that forbid farmers from saving seeds year-to-year, a practice that has been part of agriculture for centuries. They demand farmers buy new, expensive seeds each year. And if a farmer stops using Monsanto’s patented seeds, they are at risk of breaching their contract. Sprouts from patented seeds planted in a previous growing season can “volunteer,” or grow spontaneously the following year, even in a new crop variety. If discovered, the farmer could face penalties for patent infringement. Monsanto fosters strife in rural communities by running a “hotline” that encourages farmer to call the company and inform on their neighbors, and has even hired retired farmers to entrap farmers into buying seed illegally, activities one judge referred to as Monsanto’s “scorched earth policies.”

Monsanto has undertaken an unprecedented litigation campaign against American farmers to end the practice of seed-saving and so maximize its profits. They devote $10 million of its annual budget to investigate approximately 500 farmers each year who are suspected of patent infringement. As of November 2012, 410 farmers and 56 small businesses and farming operations have been involved in court cases involving alleged patent infringement, and have paid the company nearly $24 million in damages, a sum that does not include additional litigation costs like attorney or witness fees. While Monsanto has taken action against thousands of farmers, only the vast majority reach pre-trial settlements to avoid facing the multinational giant in court. When these pretrial settlements are included, farmers have paid Monsanto an estimated $85 to 160 million. Monsanto would like to dismiss the significance of these suits and direct attention to their new website full of smiling, meticulously selected farmers. This is simply a distraction from the hundreds, if not thousands, of farmers who have lost their livelihoods to the corporate machine.

*Monsanto poisons farmers and their communities.

Monsanto touts the safety of their products and claims to support worker safety, despite established links between pesticide exposure and declining health. Farmers in the U.S. who consider their health damaged by Monsanto’s products have had a hard time finding legal recourse. Farmers overseas have had better luck. In 2012, a French court ruled that Monsanto’s Lasso weed killer was responsible for poisoning a French farmer, who suffered from memory loss, stammering, and headaches. Because Monsanto had not properly labeled the pesticide, the farmer did not know how toxic the chemical truly was. For years, Argentinian farmers have experienced increased cases of cancer and birth defects, ever since Monsanto products were introduced to their fields. This year, the community successfully filed a suit to block Monsanto’s construction of a transgenic seed plant, fearing their health would continue to worsen.

Monsanto does not share our values and they aren’t interested in changing their ways. To learn more about issues related to genetic engineering (or GMOs), visit www.CenterForFoodSafety.org.