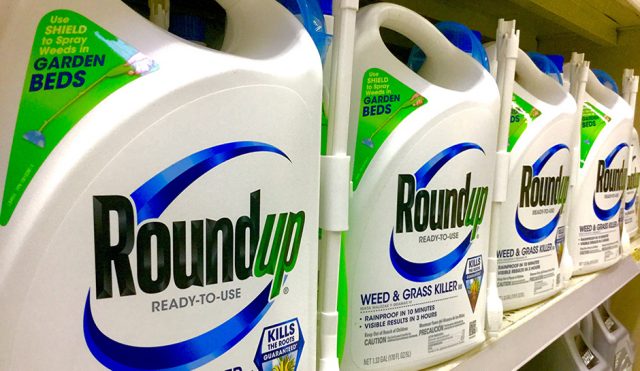 Soon after a California judge required a cancer warning to be displayed on the popular weedkiller, Roundup, in accordance with the Safe Drinking Water and Toxic Enforcement Act of 1986, Monsanto is suddenly finding itself knee deep in cancer lawsuits. The lawsuits are being filed over the health risks associated with glyphosate, a chemical classified by the WTO’s International Agency for Research on Cancer (IARC) as a “probable human carcinogen.”

The new round of lawsuits was filed in St. Louis County Circuit Court last week by Baum, Hedlund, Aristei & Goldman, a law firm based in Los Angeles. It was filed on behalf of “136 plaintiffs from across the country who allege that exposure to Monsanto’s glyphosate-based weedkiller Roundup caused them to develop non-Hodgkin lymphoma.” Additionally, the firm has also filed similar lawsuits in Alameda County, California, Superior Court on behalf of 40 people who “allege that exposure to the herbicide caused them to develop non-Hodgkin lymphoma.”

According to Robert F. Kennedy, Jr., a co-counsel in the lawsuit, the law firm decided to file the lawsuit on behalf of the plaintiffs “to address the injuries that have been caused by Roundup and glyphosate to mainly farmers and farm workers, but we think that consumers and home gardeners have also been affected.”

Plaintiffs from both cases are seeking compensatory and punitive damages for wrongful death and personal injuries against Monsanto, according to EcoWatch. Other defendants include Osborn & Barr Communications, Inc. and Osborn & Barr Holdings, Inc of St. Louis, Missouri, and Wilbur Ellis Company, LLC of San Francisco, California.

With this latest round of lawsuits, the number of cancer claims that have been filed in federal courts against the agriculture giant is more than 700! And that number is expected to continue climbing. Kennedy even suggested that “claims could increase to 3,000 in the next few months” in light of the new cancer warnings being displayed on Roundup.

However, the lawsuits aren’t just sounding the alarm on the cancer risk associated with Roundup. It’s also shining a light on the corruption that exists throughout Monsanto. For example, just last week, “a federal judge in San Francisco unsealed documents suggesting that company employees had ghostwritten scientific reports that U.S. regulators used to determine glyphosate does not cause cancer.” In simple terms, Monsanto tried to hide Roundups risks from the public and regulators so the company could go on, business as usual.

Kennedy summed up the company’s corruption in a recent statement, saying:

“Monsanto’s newly released documents expose a culture corrupt enough to shock the company’s most jaded critics. Those papers show sociopathic company officials ghostwriting scientific studies to conceal Roundup’s risks from Monsanto’s regulators and customers, including food consumers, farmers, and the public…One wonders about the perverse morality that incentivizes executives to lie so easily and to put profits before human life. All humanity will benefit when a jury sees this scheme and gives this behemoth a new set of incentives.”

The scary thing is, despite reports and tests classifying glyphosate, as a carcinogen, Monsanto continues to claim that “Roundup creates no risks to human health or to the environment.” But according to reports like the one from the WTO classifying the chemical as a probable carcinogen, it does, and that’s why consumers across the globe should be ecstatic that Baum, Hedlund, Aristei & Goldman has decided to take a stand against Monsanto to shed light on just how crooked the company is.

So what does Monsanto have to say in its defense? Well, in addition to continuing to claim that glyphosate is perfectly safe, Monsanto spokesperson Charla Lord issued a statement saying:

“We empathize with anyone facing cancer. We can also confidently say that glyphosate is not the cause. No regulatory agency in the world considers glyphosate a carcinogen.”

There’s no denying that this is shaping up to be a whopper of a case, and it will be interesting to see how things unfold in coming weeks and months.