Today I was surprised to see that FL had his beard trimmed.
The nurses had offered to tidy him up a bit and he either said yes or did not say no…!
The strange thing is, he seems to have lost 30 years in the process.
His head is as pale and cool as marble.  Serene. His wrinkles have almost disappeared.

He was awake for maybe 5 minutes out of the 6 hours I spent with him today.
He did not have the strength to use a straw, so today he was given milk in a child’s sippy cup.
The nurse told me that the next step is a “pink lollipop”:  a moist swab to hold to his lips when they are parched but he can no longer swallow.

I finished knitting my Qwist hat, a pattern by Melanie Berg.
The yarn is my first real two-ply handspun, a blend of Norwegian wool and bamboo from Fondant Fibre.
When I got home I sewed on the pompom.
I will show him tomorrow:  I think it will make him smile :) 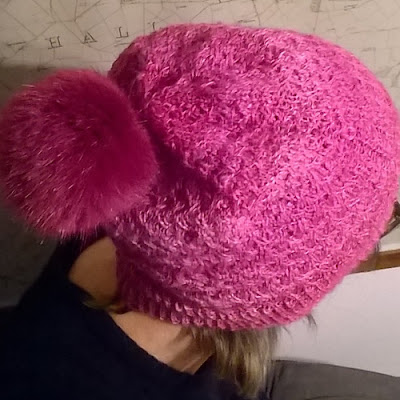