This month has us seeing some milestones that I have dreaded for years. Yesterday, our daughter was driving a car. She had her first driving lesson. Back in the day, we didn’t get our permits until we were 16 1/2. Now, they get them at 16, but, they have conditional licenses when they are 17, which we never had. Either way, these kids seem like babies to us. We live in a very (read: OVER) populated area in New Jersey. It’s wall-to-wall cars and traffic here and everyone is in a hurry and either talking or texting on a cell phone too. No one uses blinkers anymore, they are steering with one hand and holding their phone with the other. If I was a cop, I’d write people for using cell phones ALL DAY LONG. No warnings, ticket city, baby. 4 years ago, a teenage girl almost mowed me down while I was crossing a street she turned onto while texting. I am STRONGLY against it all. Anyway, I have dreaded my kid driving a car since before I even had a kid. And, the older I get, the more horror stories I’ve heard, and the more nervous I get. I have decided that she is not driving with her friends right after they get their licenses. So many kids get in accidents in those first few months. I don’t need my kid in the car with them for that. This may sound extreme, but, one more tragedy in my life and it’s gonna put me over the edge. To say I feel jinxed after the life I’ve lived, would be an understatement. Plus, I drive to the high school and see these kids cut people off and have all these near misses or accidents even. The first day I had my new-to-me Volvo, a high school kid pulled right out of a side street without seeing me and almost caused us to crash. It was a close call. I bought this Volvo for Liv. Volvo designs their cars purposely to protect the occupants in the event of a crash. But, her friends won’t be driving Volvos. Nope, I am a stay-at-home mom for many reasons and one of them is so that I can drive my kid safely wherever she has to go. Thursday and Friday will be her final 2 lessons and then, I have to summon the courage to start letting her drive me around this crazy place. I’ve always said that THIS is when I will start drinking alcohol, or move to Minnesota, or both. OY! I am so nervous about all this, but I know I have to give her as much experience and pointers that I can before she turns 17 and it’s outta my hands. I don’t know if I’ve written this on this blog already, but my younger sister knows a woman whose 14 year old son died being in the car with his 17 year old friend, on a highway right near here. The woman in my bank just told me her nephew crashed his car the first day he had his license and he and his friend died because it burst into flames and they couldn’t get out. UGH, I needed to hear that story this past week like I needed a hole in my head. I am going to be doing a whole lot of praying about this. Call me overprotective all ya want, but, you cannot turn back the clock. My nieces and nephews all got in accidents too. Statistics don’t lie and the statistics for inexperienced drivers are hair-raising, to say the least.

The second milestone is that Liv is going on vacation without us. She will spend a week in LBI with our friends to hang out with their daughter. Another OY. This will be the first time she is really away from us. I am not looking forward to it at all. Oh, I’ve gotten used to the sleepovers and the fact that she is out a lot with friends. And, during sports seasons, I drop her off at school at 8 am and don’t see her until 6 pm. BUT, this is a whole week away, 8 days really. No one sleeping in her bed at night. I know this is good for her. I want her to be independent and she is not the least bit concerned about being away from us, which I am VERY glad about, but, I will miss her terribly.

So, the kid is growing up. I strongly wished yesterday that she was four again. As with so many things in life, you don’t feel ready for them, but, they happen anyway.  I’m proud, glad, and petrified all at the same time. This pic of her and Tim was taken in Cape May last week on top of the lighthouse and YES, yours truly hauled her asthmatic, back-injury plagued, out-of-shape, vertigo and claustrophobia toting butt up 188 stairs too. There’s our little girl, reaching new heights. I spose I should post the other picture that shows she’s reached a higher height than her mom. Just a sec….. There ya go. Yep, she’s taller, but I’m still the boss!!!  ;o) 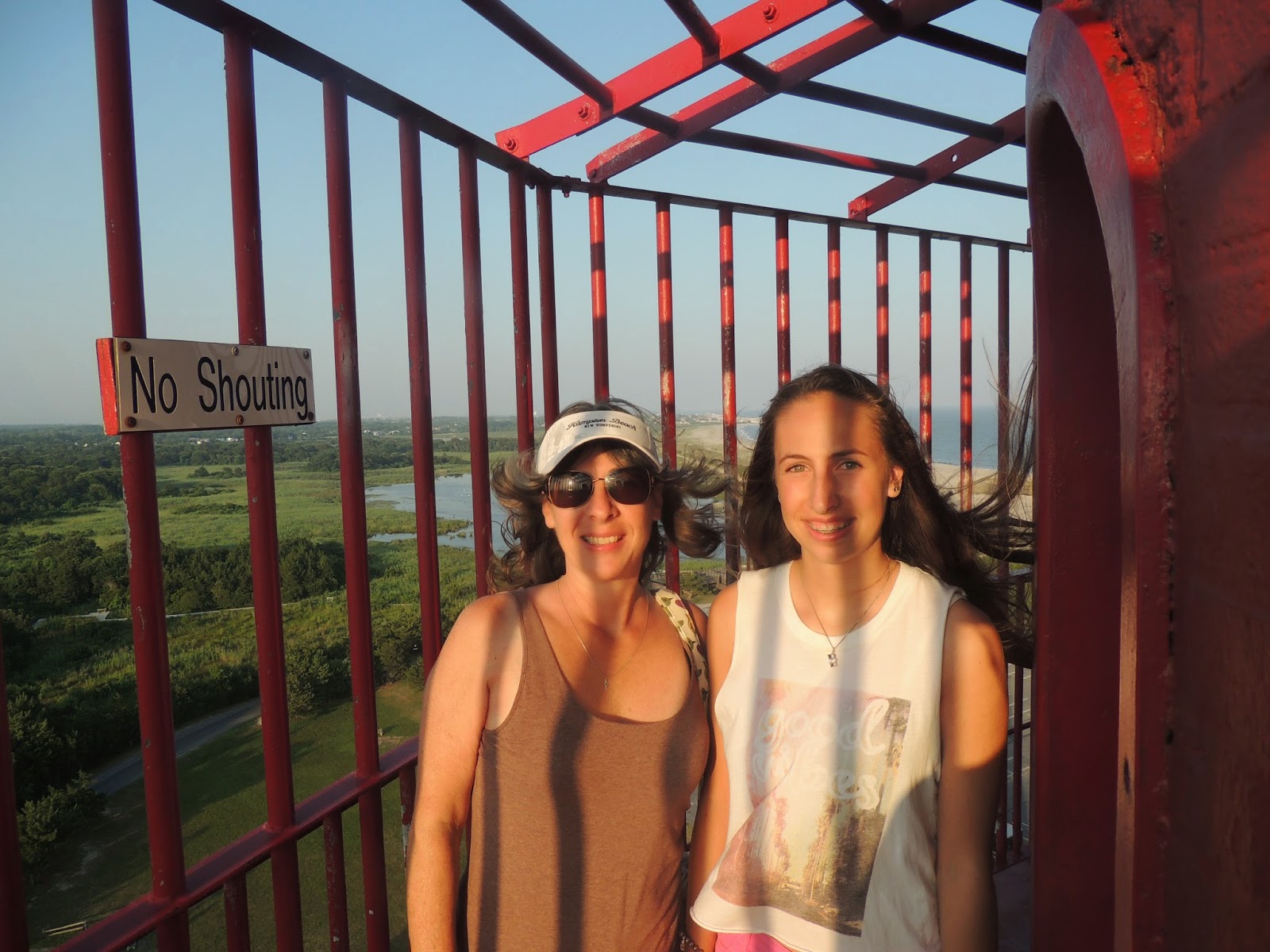 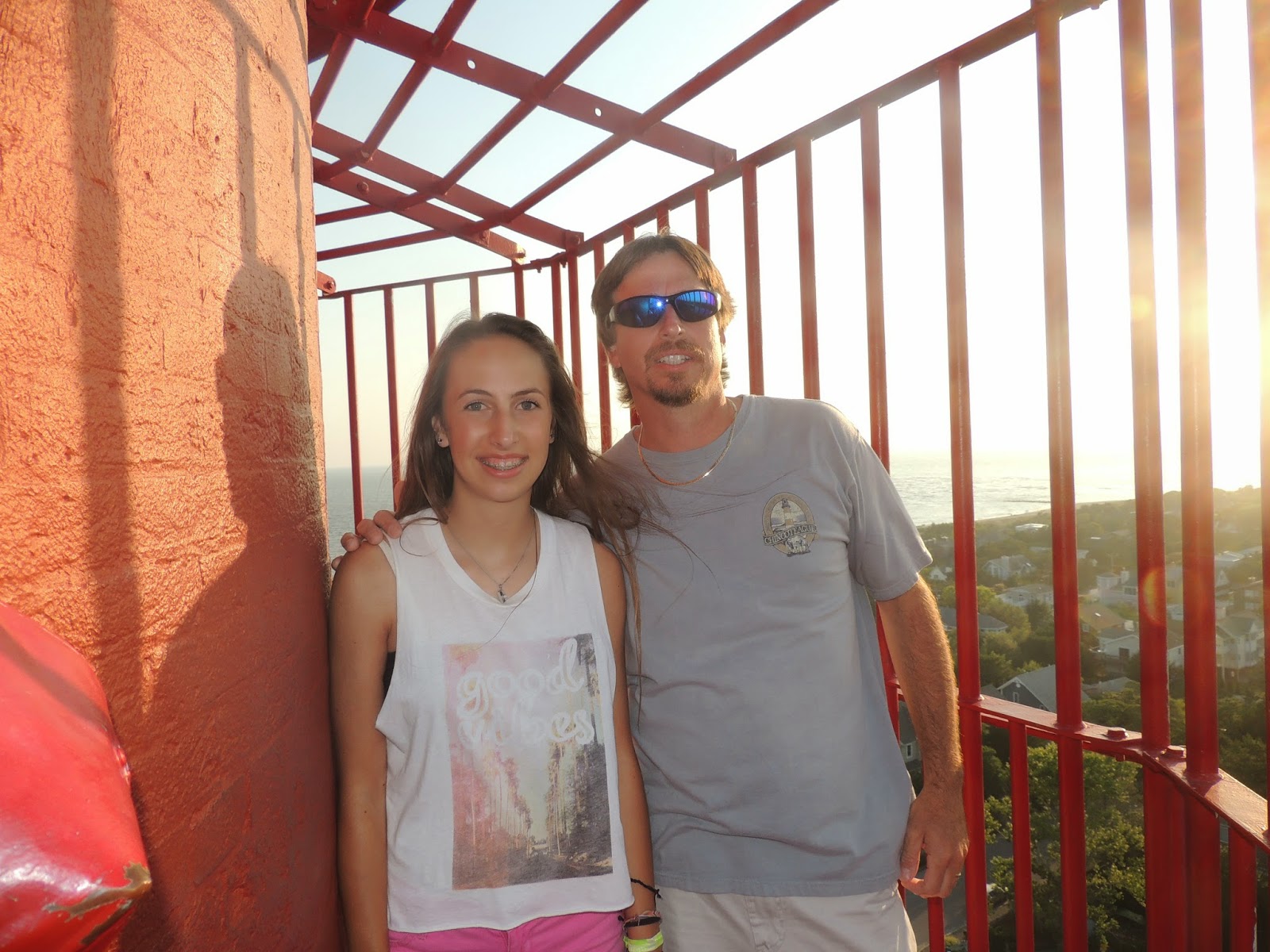