Where was I? Oh yes, the Midland Hotel. The rest of the afternoon was spent admiring the view from the balcony, followed by an act of utter selfishness. Despite the discrete card saying shower instead of bath I ran the deepest bubble bath, in full view of the world and lay in it admiring the sea view while sipping champagne! (The champagne was a wedding present that we had saved for a n other special occasion.)

Then it was off to the Rotunda bar to sip cocktails before our three course dinner in the hotel’s restaurant. The food was fantastic, although I couldn’t eat everything on my plate. After coffee we were so stuffed we thought we had better take a slow walk around the hotel to aid digestion. We ended up going to bed so full we both felt sick. Oops.

As you will have seen from the photos yesterday the weather was overcast, but what the photos don’t show is the temperature. The only way we could sleep was to have both the sliding doors open which meant I fell to sleep watching the lighthouse across the bay twinkle. 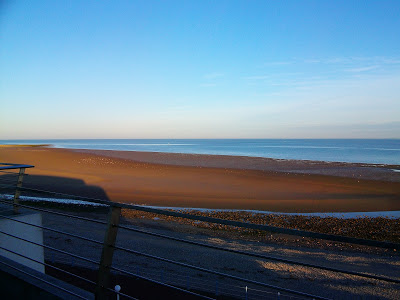 Bright sunshine and a large number of oyster catchers, what do you mean you can’t see them? Trust me, I got out the complimentary binoculars and checked with the R.S.P.B., they are definitely oyster catchers at the water’s edge.

After a lazy breakfast we did the usual seaside things, walked up the beach, stared into rock pools, had an ice cream, before a final cuppa outside the Rotunda before travelling back to Lancaster where we ate before our journey home.

We arrived back home just before 9:30 p.m. to find my daughters had been up to no good. 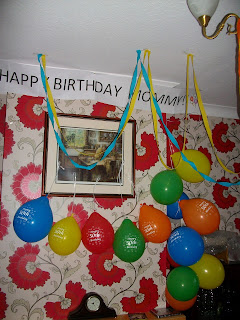 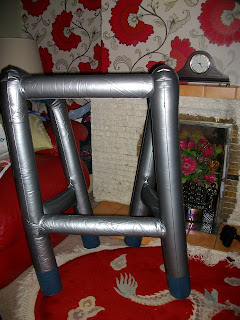 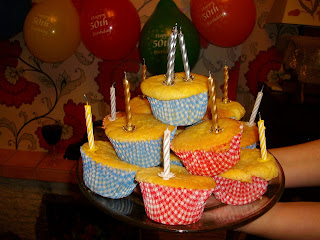 Yes that is an inflatable walking frame! The lemon drizzle cakes are to die for though, so I might forgive them.