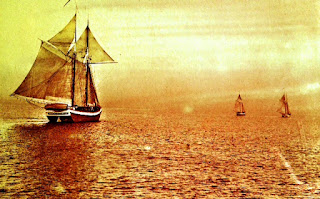 I come from a long line of sailors.  On my mother’s side, my great great great grandfather was a sea captain in the first half of the nineteenth century.  On my father’s side, my great grandfather was listed as the only sailor in his company – all the rest being farmers – on his Civil War muster papers from the State of Michigan.  A treasured family heirloom is this photograph of three sailing ships on Lake Michigan. My grandfather had written these words on the back of the picture:

“21st Birthday, July 26, 1902 – On our way to Manistique with 1600 pounds of apples on the Mary L in company with Rambler and Lulu Guy”
My Grandfather 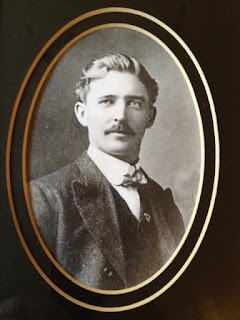 My dad inherited this great love of the sea and it defined  his life.  He spent eight years in the U.S. Navy including WWII. (If the truth be told, he would have made the navy a career if my mother would have been willing to move.  She didn’t want her children to be moving frequently and I can appreciate that.)  After the war, he became a commercial salmon fisherman in Washington State and he fished many years in Southeast Alaska.  In his later years, he had a sailboat that he was able to sail by himself until he was 87 years old.  He was never happier than when he was on the water. 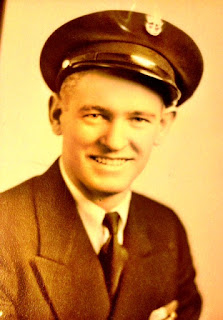 Though I have this nautical history in my family, I have never had that strong connection to the sea and my only sailing experience was with my dad.  Oddly enough and maybe because of my heritage, I have come to view sailing as a metaphor for my multiple myeloma odyssey.

Throughout my life, I have had the good fortune to have the wind at my back.  You might say I have sailed through life pretty easily . . . until now. I grew up in a loving home with parents who taught me well and prepared me for a productive, happy life.  I was a good student in school and had lots of friends and I participated in many activities.  I went on to graduate from Western Washington University and had a long and successful career in education.  I married my WONDERFUL husband 43 years ago and we have two great children who we are very proud of.  We lived a good and mostly trouble-free life until January of 2010 when I was diagnosed with multiple myeloma.

When that happened, the gentle wind at my back that had been propelling me through life, became a violent storm. This great fury damaged my “ship” but didn’t sink it.  Radiation, chemotherapy and an autologous stem cell transplant repaired the damage, but I no longer sense the wind at my back.  I am in the doldrums, like those latitudes in the Atlantic and Pacific Oceans where there is no wind and sailing ships can languish for days and weeks.  I, too, have been languishing.

I have found it difficult to get motivated and excited about moving on with my new life and I am not sure why.  One thing I do know, I am wasting precious time.  This sense of malaise has been dampening my spirit and I want it to end.  I want to feel the wind at my back again.

I wrote the draft for this post over a week ago.  A few days later, I went for a preliminary screening for the Livestrong Exercise and Thrive program at the YMCA and I came away with a renewed spirit.  Was that a hint of the wind at my back I felt?  Yesterday, I made reservations for two Alpha Delta Kappa International Honorary Organization for Women Educators Regional Conferences and will be going to Denver and Boston this summer.  Is that a breeze I am feeling?

Maybe the lesson for me is to begin living again, inhabiting my days and making plans for the future.  I am determined to make that happen.  I know there will be setbacks, but I can’t let that stop me.  When I really feel the wind at my back, I will know I have succeeded.