I went into my appointment yesterday very optimistic. Unfortunately, Dr. R did not tell me what I wanted to hear in terms of pregnancy. That being said, this blog post has been written and revised and written and revised several times. I hope that it does not come off as negative, whiney, or melodramatic. :)

So. I met with Dr. R to review my results yesterday afternoon. Afternoon is a relative term. My appointment was scheduled for 4:45 and I didn’t actually see him until 7:00! Whoa. What’s up, triple bookings? However, over the last 3 years having appointments with Dr. R, this is something I have grown accustomed to. Annoying, but always worth the wait. Good thing I brought papers to correct, snacks, AND my husband, mom, and sister. Definitely helped pass the time. :)

At the beginning of the appointment, I shared with Dr. R the leg pain that I have been experiencing since my biopsy in July. He confirmed that a nerve must have been damaged but eventually it should heal. I also shared, yet again, that I experience frequent night sweats and fevers.

The discussion continued on to review the results of my MRI, blood work, and biopsy.

M-spike is .42 up a little bit from September when it was .39. Still very low, but consistently moving upward over the last 3 years. Not so great. 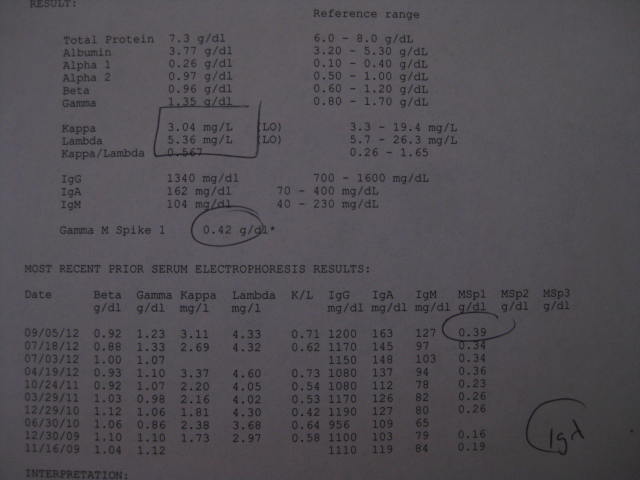 Free light chain levels are abnormally low, but the ratio is normal. Great.

Blood work is all within normal range. 24 hour urine has no monoclonal protein. Great, great.

Biopsy results continue to be concerning. The full results can be viewed here: Biopsy Results – December. Not great.

My aspirate in July was 3% including atypical forms. My aspirate last week was 1% with rare binucleated forms.

In reviewing my biopsy reports and seeing….

MOST CONSISTENT WITH INVOLVEMENT BY A PLASMA CELL NEOPLASM.

HIGHLY SUSPICIOUS FOR INVOLVEMENT BY A PLASMA CELL NEOPLASM.

….all I have to say is that the pathologists need to simmer down. Chill out with the caps lock. We get it.

Anyway, Dr. R was very reassuring that the majority of these results are very good, particularly the negative MRI, low m-spike, FLC ratio is normal,  PET/CT from August was negative, and  most all other blood work is in the normal range. The majority of my prognostic indicators are considered low-risk.

The main areas of concern are that the plasma cells are in rare binucleated forms and that the 10% plasma cells in the biopsy technically classifies me as smoldering myeloma not MGUS.  I asked him, “So am I MGUS or smoldering?” He of course said something along the lines of… “Well you have a plasma cell dyscrasia and everything points to MGUS except for the biopsy.”

My real issue (heh, who knows what my real issue is, if you know me, you know I have many :)) is around family planning. Dr. R described my situation being similar to a woman who was in the early stages of breast cancer. Doctors would advise a woman with that diagnosis NOT to become pregnant due to the fact that pregnancy would progress the cancer.

Similarly, myeloma cells have estrogen receptors and there is risk that the same thing could happen – the pregnancy hormones would be feeding the cells and causing the myeloma to progress. Some of the very drugs that TREAT myeloma (Revlimid, Thalomide) are absolutely detrimental to babies growth. These drugs are forbidden during pregnancy. Dr. R said that he has had two female patients who presented with myeloma at the end stages of their pregnancies. Obviously, there is no way to know what their MGUS or SMM numbers were before their pregnancies. This is a little repetitive since I wrote a post regarding Pregnancy & Myeloma but this is where I’m at. The problem is my plasma cells are not below 10% and really he originally thought that I would be below 5% which would give me the green light. No such luck. He said that we might need to be “creative” in terms of having a family – basically our best options would be surrogacy or adoption.

We talked a little bit about the NCI and how I spoke with Dr. MR regarding the Natural History Study of MGUS & SMM and said that he said they have a very different philosophy from Dana-Farber. Dr. R agreed and said that the doctors at the NCI tend to be a lot more aggressive in their treatment of myeloma. He also mentioned that if/when I go there for the The Natural History Study they might even recommend CRD (carfilzomib, revlimid, dexamethasone) for smoldering myeloma. Dr. R said that Dana-Farber tends to be more conservative and first and foremost their philosophy as doctors is to, “Do no harm.” I am hoping to hold off treatment for as long as possible so I think at this time I would definitely agree with this, “First, do no harm.” philosophy.

Dr. R is going to consult with Dr. RK and Dr. MG at the Mayo Clinic regarding my profile. He said that he would call me sometime before Christmas and let me know what the doctors at Mayo said. Merry Christmas to me! He also said that I should go back to see him in 6 weeks to review this information face to face and to check my blood levels again. In addition, he recommended I see an infectious disease specialist prior to my appointment to rule out anything else that might be causing my fevers and night sweats.

All of these results are really good news and overall I am doing very well within the context of this disease. I keep trying to tell myself that.

As heartbroken as I am regarding the implications for me in terms of pregnancy, the good news is what I am trying to focus on. Dr. R said that in 10 or so years if/when I progress to symptomatic multiple myeloma there will be so many more treatment options than what there are now. There will also be so many more published research studies than there are now. Doctors are definitely headed toward what he called a “functional cure.” Great news. But, at this time however, if I were to become pregnant and the myeloma were to become active he said, “We could buy you maybe 10-15 years, but not 40. Right now myeloma is not curable.”

Ugh. A lot to think about over the next 6 weeks. My mom, sister, husband, and I discussed everything over beers and french fries after the appointment. Very bad for my Permanent Health Kick, but very much needed.

I must mention, really, the BEST news I got yesterday is: I DO NOT have to do a 24 hour urine collection prior to my next appointment! Fabulous.