When I was first diagnosed with multiple myeloma 13 years ago, I conducted a search of the available information on which facilities had the best survival rates.  To my total surprise I found very little information.  Mayo clinic published their data and it was disappointing at just 33 MONTHS, the consolidated National Cancer Institute’s data base mirrored the Mayo information.  The only other published information I found was for The Myeloma Institute at UAMS.  They published a life expectancy of an average of 7 years.  I was treated at Mayo and they got my myeloma under control, but I chose to have the majority of my treatment at UAMS, hoping for the extra 4 years.  Now being nearly 13 years post diagnosis, I think choosing a treatment facility on a data driven basis was a great decision.   Now fast forward to 2018 and Mayo Clinic’s myeloma survival  has made quantum leaps. Transplant eligible patients (whether they have a transplant or not) can expect to be alive for more than 10 YEARS.  I just updated the Mayo data on the web site www.myelomasurvival.com and state the following:

Mayo Clinic(Dr. Vincent Rajkumar), Rochester, MN – The Mayo Clinic published an update of their myeloma survival rates for transplant eligible   and posted it on line  12/3/2018.  They reported Overall Survival (OS).   OS includes death from all causes and The SEER data is based on Relative Survival which excluded non myeloma deaths.   The Mayo Relative Survival rates are 95.9% at 2 years versus the SEER rate of 72% and 89.8% at 4 years versus the SEER rate of 57.7%  When compared to the SEER rate you are 6 times more likely to die in 2 years and 4.1 times more likely to die in 4 years at the average SEER facility than if you were under the care of the Mayo, Rochester.  You can see a graph of the data if you CLICK HERE. This data is reflected in an OS study of 518 consecutive transplant eligible patients seen at Mayo Clinic. An outline of Mayo’s risk adapted treatment template called mSmart can be found at the attached link: http://www.msmart.org/

As noted, Mayo and most programs provide their data as Overall Survival(OS), and the National Cancer Institute adjusts the data to exclude the non myeloma deaths.  This measure is called Relative Survival(RS), so to make a comparison of Mayo’s information to that listed on the NCI SEER data base, I have adjusted the Mayo data to reflect Relative Survival.  The graph  below is this comparison. 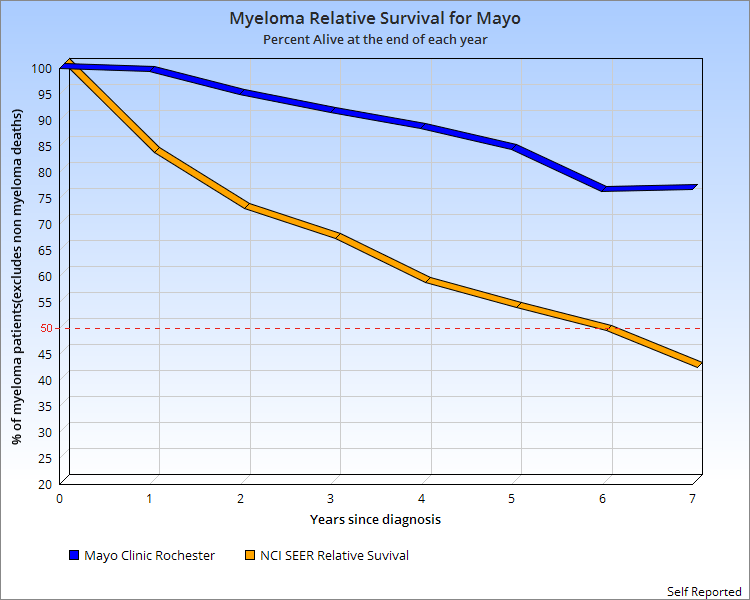 Some very eye opening observations include 1) 17.2% of patients do not survive the first year if treated at the average SEER facility, whereas less than 1% of Mayo’s patients do not survive year one.   This huge difference in surviving the first year is a huge element in overall survival.  2) The difference or spread in the two lines widens with time, so the improvement over the average SEER facility also improves.

In addition if there is to be any true cure, the Mayo graphs slope need not flatten but less than or equal to the slope of the Social Security Life Tables.  If the blue line continues to run parallel or the gap between the blue and gray line does not get larger, this I might argue is the definition of cure.  What this means is the remaining population of myeloma patients is dying at a pace less than or equal to the national average of all people. 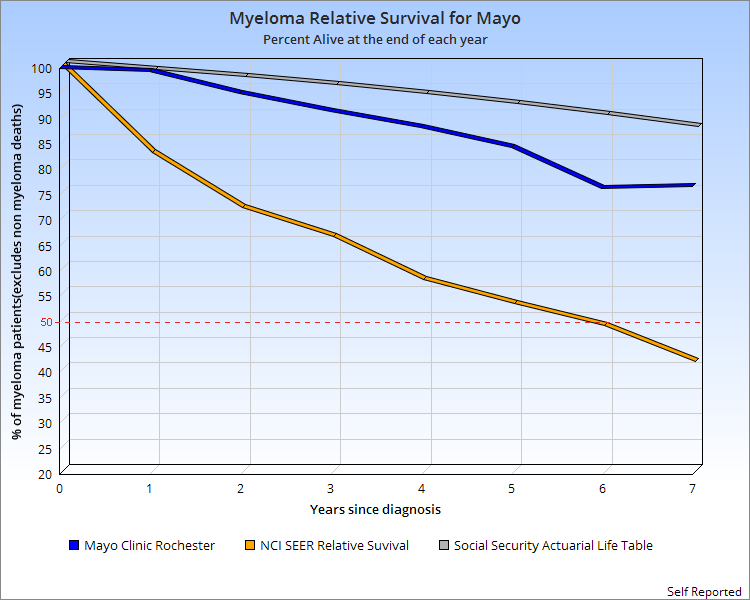 With all the new treatments now being used by the top myeloma facilities and the outstanding CAR T, BiTE, ADC  and other clinical trials available to their patients, these rates for Mayo most likely will improve.   These improved rates would be expected to be duplicated at other top academic centers of excellence.  Continued  improvement in myeloma life expectancy is not an if, but more likely WHEN!

The Christmas and Holiday Gift to mankind is the mSmart template published by Mayo Clinic(CLICK HERE) which outlines the process they go through to reach these excellent survival rates.  If the local hematologist/oncologist throughout the world are able to follow this template for treatment and supportive care the myeloma survival throughout the world may improve significantly.  This is the only open source treatment template widely available.  The next step will be individualized myeloma care based on the Health Tree being co-developed by Dr. Rafael Fonseca of Mayo and Myeloma Crowd.