For the first time, I’m going to post a photo of myself directly on the blog. Here I am:

And for the record, my chip time was 2:23. My goal was to finish in under 2:30, and I stayed with the 2:25 pacers until about mile 11, and then — whee! — I took off! Well, I took off as fast as an 11-ish-minute-mile gal who has already run 11 miles can take off, but I beat my group by two minutes. I finished just as the very first runner from the full marathon was finishing, but I won’t dwell on that. 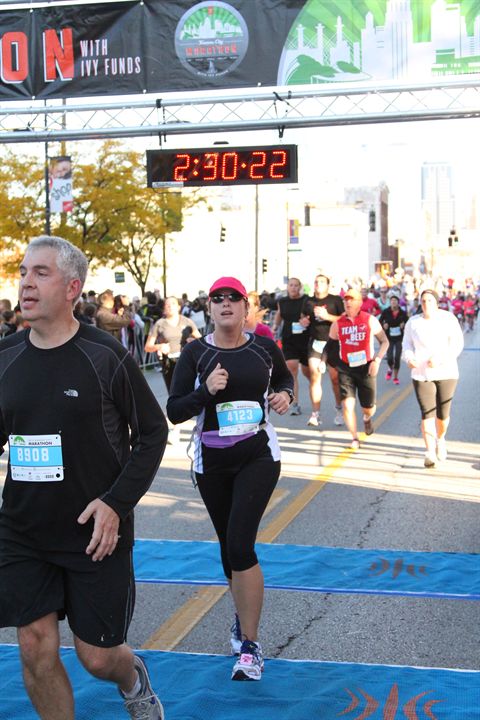 Why am I posting this photo of myself? Because it doesn’t look like me. I am in disguise.

I have a complex system of running gear that starts with the pink hat. I love my pink hat; WCK thinks the pink hat looks ridiculous. She’s convinced that all of the other runners must be laughing at the pink hat, too, and that I could possibly win the entire race because all of the other runners will be collapsing to the ground from laughing at my hat. I continue to wear it, though, because a) I like pink and b) it sucks a lot of the sweat off of my head and keeps it from running into my sunglasses. I need the sunglasses at all times because I wear earbuds that have the little hooks that go over my ears, and the sunglasses hold the earbuds on. I need the earbuds because if I try to run without Bon Jovi, I die. So you see that I have a very complex system in place, and each piece depends on the others to keep me alive:

Because of this complex system, I’ve noticed an interesting phenomenon. At the park where I run, I often run by people I know, people who should recognize me, and they have no idea who I am. It’s possible that you’re reading this blog and you’ve seen me run by you at the park and you’ve had no idea. It happens a lot.

OK, fine. The lady from my exercise class didn’t recognize me. I should cut her some slack. A week before the half-marathon, I ran a 10k, and Jay and WCK were waiting for me at the finish line. My own husband, who was actively looking for me, did not recognize me. He saw me coming and turned to WCK and said, “She’ll be wearing a pink hat, like that lady.” The following week, my parents — my own parents! — did not see me cross the finish line because they didn’t know who I was.

The only person who can recognize me in my running gear is, of course, WCK. She’s the only one with the special power. It’s like those horror movies where the innocent child is the only one who can see dead people or evil spirits or whatever. WCK can see pink hats. And then she laughs at them.