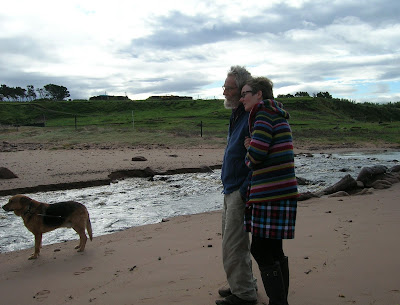 We were SO ready for a holiday… and yet we were not ready at all.  Up until the very last minute, I wasn’t sure that FL was going to be well enough to travel.  By travel I mean “drive”.  Male pride dictates that the man of the house does Big Drives.  So even though I had driven him to each of his 5 hospital appointments in the preceding days, FL insisted that he would drive us to the west coast in his car.  Big sigh.  It was only when I went to put the dog in the boot for the journey that I realised he had packed his golf clubs, and that this was the real reason for taking his car – mine doesn’t have the capacity for dog and clubs!
Did he golf?
Don’t be ridiculous!
But he was keeping the hope alive. 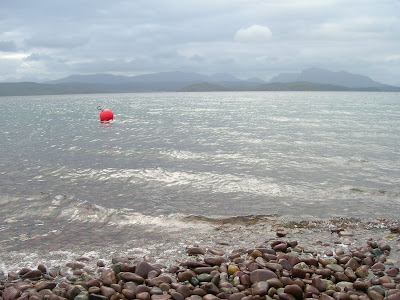 Our holiday got off to a rocky start.  FL took an instant dislike to the cottage which I had scoured the internet to find.  It ticked all the boxes for:  location, cheapness, dog-friendliness, bedroom and bathroom on the same floor, enclosed garden.  But it was emphatically a holiday home, stripped clean between guests and scrubbed to within an inch of its life.  No books or maps or spice racks or personality.  My request that FL take his muddy shoes off at the door earned me 24 hours of silent contempt.  Oatmeal carpets, people! 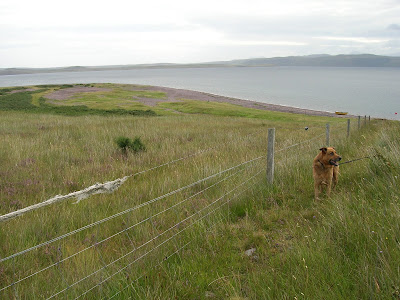 So I took to the road with the dog until he came out from underneath his dark cloud.  In my heart I knew it wasn’t about me or the cottage or its carpets, but I couldn’t sit there in that dark room with that awful ticking clock, in the wake of his misery.  I left him to sleep it off.
By Tuesday, I managed to start taking photographs while I was out, no longer afraid to make memories. FL negotiated with the landlady to bring him a table he could pile his papers upon, and although I don’t think he did much writing, it stopped being my fault.  We made it out to the Melvaig Inn for a meal.  I started to relax. 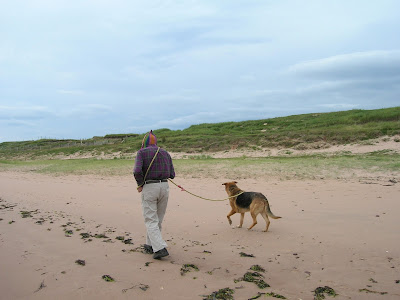 And on Wednesday we discovered Firemore Sands, where the path to the beach was flat enough for FL to walk a hundred yards or so before it became too much and he had to go back to the car.  Yes, he really does have the dog attached to a tow-rope. That’s Hero’s street cred shot to pieces! 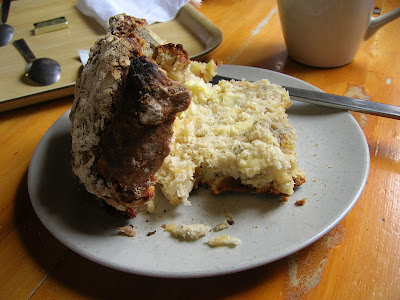 In Gairloch, we steered past the coach parties to seek refuge in the Mountain Coffee Company / Hillbillies Bookshop.  A seriously good bookshop with great coffee and giant baked goods.  There was a whole section devoted to vegan cookbooks.  I bought Vegan Planet.  They have rooms to let too – ooh!  That edifice on my plate is a cheese and herb scone.  It lasted me two days, stowed away in a napkin for safe keeping. 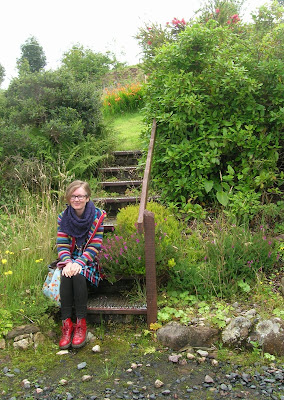 Here I am in the shrubbery at the cottage.  If you are wondering what on earth I am wearing… it is the Staccato Jacket I knitted for The Girl many moons ago.  It was always too colourful for her taste, and I decided it was time I claimed it as my own.  I spent the whole week bundled up in its woolly warmth, sometimes with my plaid Darling Ranges dress, or with my prairie skirt, or my jeans.  That’s the Lonely Tree shawl at my neck.
Apart from dog-walking, I spent many quiet hours reading two novels:  Gone Girl by Gillian Flynn, and Signs of Life by Anna Raverat.  The first is a pretty disturbing but compelling read, well out of my comfort zone.  The second takes a more literary approach to the maybe-murder-mystery with some unfamiliar quotes from poetry which I need to follow up.  Yeah, I liked this one a lot.

“I have written this
so that
in the next myth
my sister
will be wiser.
Let her learn from me:
the opposite of passion
is not virtue
but routine.”
Eavan Boland

And did I do some knitting?
I did LOADS of knitting!
I’ll show you that another day. 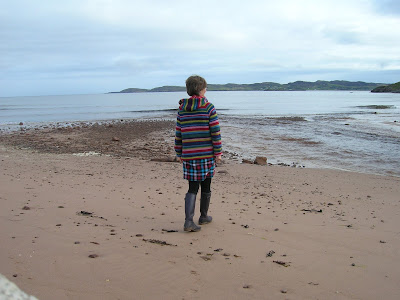 So there you have it.  A week in the shrubbery.  For now, it is enough that we are home again and we are still friends.  FL says that was our last holiday together.  He means it.  It wasn’t just that he feels too weak these days for long-distance travel (though he does), but as he said:  “It was all too much of a struggle.”  I would agree with that.