Skip to content
There are no lions in England
Lions – Ian Brown
… Stop Press … Transplant next week !!! …
I had another biopsy a couple of weeks ago. (I’ve lost count of how many that is now. 8? 9?) The good news is it was much better than before: a mere 10% plasma, as opposed to 80% a few months ago. (Normal is <5%.) Either things have improved dramatically, or the previous result was an outlier, or a bit of both. The somewhat perverse consequence, though, is I’ve been told I should proceed urgently to transplant.

This brings dialm full circle. It is not easy to see where myeloma begins or ends;  with ups and downs often only definable in hindsight. And I deliberately masked some of that in the blog, by reconstructing a diary stretching back long before I knew I had anything to record. But there are precise dates, within the blur. One of those was that I first posted this blog the week before my last transplant – 6½ years ago. Not being a “noob” (as my sons would put it) means I have a fairly good understanding of what to expect, second time around. Lucky me! The running order is I’ll have melphalan (poison) on Wednesday 11th; stem cells (salvation) on Thursday 12th; puking and shitting on those days and subsequently. Hopefully, I can spend the nights at home until the beginning of the following week. After that its the isolation room for 2 or 3 weeks. And then a couple of months slowly getting back on my feet. I’ll keep the updates reasonably regular on here.

This new plan came as something of a surprise. Perennial uncertainty is one of the hardest symptoms of all, and its impact is quite difficult to convey, even to those who know me best and love me most. Can anyone, who doesn’t live it, really appreciate quite what its like, never knowing what the next week holds? Less than two months ago, the outlook seemed very different. Our summer was just a question mark. I wrote on dialm:
“just when we thought we could make plans for the summer, we had to stop. The latest medical advice for travel plans is “wait a couple of weeks”, and “the timing might be better in 2 or 3 months”. I’ve been living with that, pretty much continuously, for years now. We wait a couple of weeks, but a couple of weeks never comes. As for the better times coming… I could be in the midst of a stem cell transplant in 3 months, for all any of us knows. It’s not easy.”

I’m amused, I guess, to have been proved right. And thankful that we decided to ignore the medics’ caution. We made the call that there might not be a better time than the present. 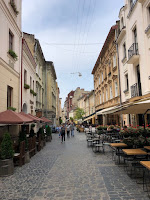 First up we rescheduled the weekend break that had to be abandoned earlier in the year (when an absence of platelets stopped me flying). People who don’t know me well will wonder why I was so keen to visit Lviv in Ukraine. Those who know me better won’t be at all surprised. I’ve wanted to go there for a long time, having read ages ago about its well preserved old town. It’s one of those places with tortuous history – it has at various times been the 2nd/ 3rd/ 4th biggest city in Ukraine/ Poland/ Austria/ Sweden … and so on. Until last year it was tricky to get to, but now there are direct flights. It’s not an expensive place to be, so we booked ourselves a suite at the Grand Hotel, and spent a weekend wandering the lanes, stopping for coffee, cocktails and food.

While sitting outside a Lvivian cafe, we got a guidebook out, and put together a really rather crazy plan. The week before, we had been puzzling over exactly where to go this summer, now we’d decided we would travel, regardless of the doctors.
“It’s the right time of year to go to Namibia”, said Marisa.
“As if we could possibly get a flight, at this short notice”, I replied, flicking open an app on my phone to prove my point.
Much to my surprise, flights were available, for a price. And so we spent the next few days working out an itinerary. Three weeks later, we were there. Namibia has been “on the list” for a very long time, but a bit of forced spontaneity added to the thrill. 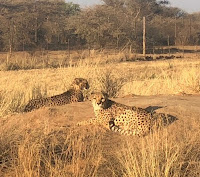 It turned out to be an amazing trip. Thousands of miles of dirt roads, beautiful scenery, stunning wildlife, great food and accommodation. Even when you’ve travelled a lot, you can still find places that are new and wonderful. We were mulling it all over, trying to compare it to some of the best trips we’ve ever taken, and best places we’ve ever been. It’s right up there. And to top it all, it was hugely reminiscent of Zimbabwe, which was lovely for me (if not a little trying for everyone else!).

We have a map of the world on the dining room wall. Each time the kids go somewhere new, they stick another pin in the map. I don’t want to collect passport stamps for the sake of it, but nine times out of ten I’d rather go somewhere new than revisit somewhere I’ve already been. Having myeloma has, if anything, added a little urgency. 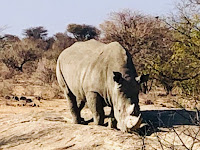 I’m not unaware (or ungrateful) of the privilege in my life. I had access to an excellent education. I am supported by a world class medical system. I have some money. I have a passport that enables me to travel where I please… Living with myeloma has maybe made me less reticent about letting it show – anyone who wants to be envious of me can go right ahead. I hope I’ve (mostly) made the best of what was available to me – I’ve worked hard (after a bit of slacking when I started university), and Marisa and I have been adventurous – taking career breaks to travel, using our holidays to go to unusual places, and trying to give our children some experience of the world’s diversity. Travel and work have always been two things that sustained me. One of the biggest impacts. for me, of illness and uncertainty, is when it stops me making travel plans, or hinders my ability to work. Which it does, a lot.

I was talking to a friend, in the park, a couple of months ago. I asked about her summer plans. She asked about mine. I explained I hadn’t any, and why. She said she was sorry to hear that. A couple of weeks later, we were talking again, only this time I had just booked flights to Windhoek. It’s difficult, when things change so suddenly, not to feel a fraud. I relayed this anecdote to my counsellor *.

“I know my friends don’t think I’m making it all up, but I do feel like I’m being melodramatic.”
“But it is a melodrama, Alex. That’s the reality.”
Yes, it is. We really did go from nothing to Namibia in less than 3 weeks. That is the bald truth. I’m lucky to get to go at all, of course. But that doesn’t negate the challenges of living with myeloma.

And I really did just scope out and plan for a sizeable work project, only to have to send my client an email today, giving my apologies that I won’t even be able to start it. A clear demonstration of the futility of planning. I’ve avoided making big commitments for so long, and when I feel it might be safe to do so, I get knocked back. It’s incredibly frustrating.

So, I’m not looking forward to the transplant, and I can think of a hundred other things I’d rather be doing… but if it releases me, even for just a short time, from the unpredictability, I’ll be happy. Let’s say, on balance, that I’m ambivalent about it all. That would seem the most fitting response. One thing I will take away from the last 2 years is a greater understanding that living for now means having the confidence to take a risk, and not worry too much about the consequences. I’ve certainly learned something about living in the moment. We spent the last week of the holidays in Sussex, and packing up around the house – the garden littered with bikes, cricket bats, footballs, paddling pool, hammocks, deck chairs, a kayak – I was able to literally count our blessings. Today the new school year starts, Gyles has changed schools, and Lyndon moves up to the junior playground. He is exactly where Ben was, 6½ years ago – which is progress I wasn’t even sure I’d witness.

Yes, on balance, the puking and shitting that lies ahead will be, in the end, well worth it.

“Lviv” is Ukrainian for lion. But we didn’t see any lions in Namibia (or Ukraine). I have told the kids this is a good thing: gives them a reason one day to go to Africa again. We were privileged enough to see almost everything else, including wild leopards, and both species of rhinoceros. Lviv while you can, people. Take the opportunities as they come. Tomorrow, who knows.

* For a long time, I only ever had counselling occasionally, when things were really bad. After the depths of last year, I decided it would be wiser to incorporate counselling as a regular part of my treatment – through good as well as bad. Even when things are good, I find unpacking it and talking about it helps me to gain better perspective. At times like now, I’m almost euphoric, because I am aware that I’m managing to live. I guess my counsellor has seen it all before, but I feel almost bipolar, reflecting back on conversations she and I had, less than 6 months ago, when I was needing transfusions several times a week.