I love Richard Scarry books. When I was in second grade, we had write a letter to our favorite author, and I wrote to Richard Scarry. After about a year, he actually wrote back to me and included a little drawing of Lowly Worm on the letter. I have no idea where that letter is now, but I wish I had it to show to WCK, because she loves Richard Scarry, too.
When I found a Richard Scarry Thanksgiving book used on Amazon.com for about five bucks, I had to get it for WCK: 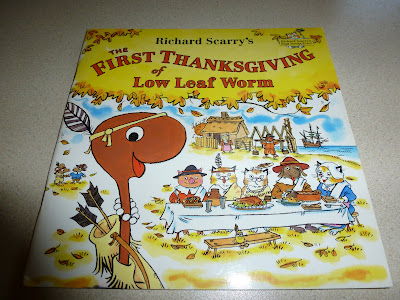 Now, I read some customer reviews of this book on Amazon, so I knew what to expect, and WCK likes it. Still, I have to say it is the strangest Richard Scarry book I have ever seen.
When you hear “Richard Scarry Thanksgiving book”, you think it’s going to be filled with the crazy misadventures of animals wearing funny hats. You think Mr. Frumble is going to get a Thanksgiving turkey stuck on his head, take off in his Pickle Car, and crash into Bananas Gorilla! Sergeant Murphy to the rescue! Pure hilarity!
This book is not like that at all. Yes, it has the adorable kitties and piggies wearing hats, but the adorable kitties and piggies wish to convey a deadly serious view of life in the 1600s. Here are a bunch of Native Americans dying of plague: 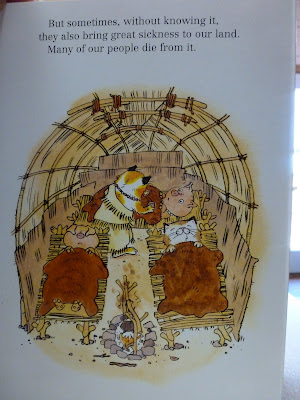 And here they are being enslaved: 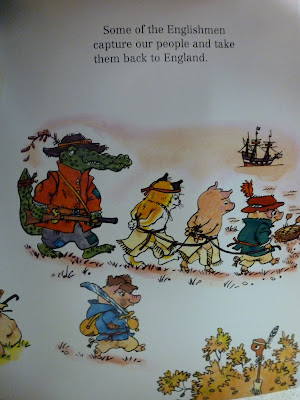 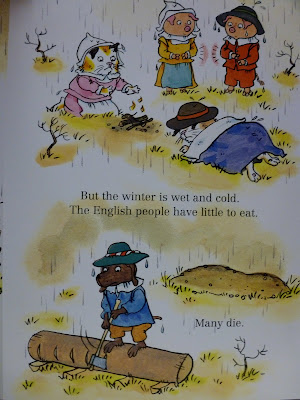 Would you ever expect to see a fresh grave in a Richard Scarry book? I don’t think “grave digger” was one of the occupations explored in “What Do People Do All Day”, but maybe I need to re-read that one.