June of 1969 was a whirlwind of activity.  I was just completing my first year of teaching and celebrating that I had survived all the trials of a new and inexperienced teacher.  However, the most exciting activity was planning my wedding that would take place on June 28.  Brent was due to return home after a year in Viet Nam, but we had no idea what day he would arrive.  We were pretty sure he would be home a couple of weeks before the wedding, but in those days they didn’t give an exact date.

As it turned out, I was at a bridal shower and had just opened the last gift when the phone rang and it was Brent’s dad calling to say that Brent had just arrived home!  You can imagine the surprise and excitement at that news.  My mom and I had driven to the shower in my 1966 GTO with a 4  speed on the floor transmission and she had to drive it home because I left in a hurry with Brent’s mother to go see him.  My mom had never driven a car like my GTO and to this day doesn’t know how she did it.

The next two weeks were spent finishing up wedding preparations and helping Brent adjust to life at home and, I suppose, the idea that he really was getting married!

June 28th finally arrived and it was a lovely sunny day. Our wedding was held in a beautiful church where we were surrounded by family and friends.  My class of 24 fourth graders were escorted in by the ushers and seated in a place of honor.  As I waited in the foyer with my father to walk down the aisle, we listened to Ave Maria being sung and I will never forget that quiet moment with my dad.

Our vows were standard vows that I had heard many times before and I know when I said them, I meant every word.  However, I don’t think at the time I could have appreciated how important they were and that we would be living them on a day to day basis.  When I became ill and was diagnosed with multiple myeloma in January of 2010, we began living our wedding vows in ways we had not had to before.

“I take thee to be my wedded wife, to have and to hold, from this day forward, for better, for worse, for richer, for poorer, in sickness and in health, to love and to cherish, till death do us part, according to God’s holy ordinance.”

In sickness and in health. . .Brent has honored this vow with great love and patience.  He has been there with me for every step of this difficult medical journey that has consumed our lives for the last three and a half years.  I am grateful every day for our life together and the vows we made 44 years ago.  I love you Brent…… 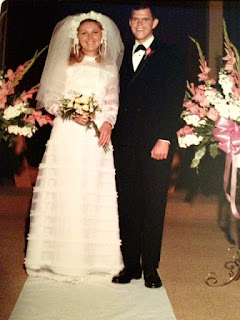 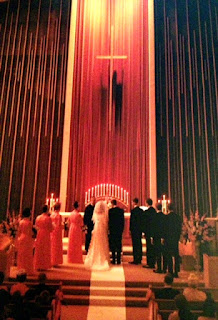 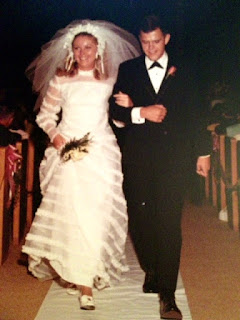 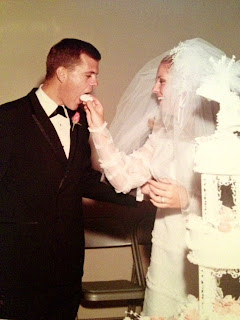 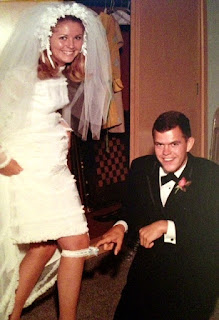 We were so young with our whole lives ahead of us.

I have written two other posts about my wonderful husband, Brent, and the great care he has taken of me: