If I’ve learned anything about this disease and the effects on the “victim”, it’s that one should not get too excited when good things happen because they can be short-lived.

Jumping right to the good news first – my honey is still in remission (Complete Response), so the vacation from treatment can continue.

Looking back over my journal, and calendar, and notes of the past 21 months since my honey was diagnosed, I’ve noticed even though he has responded well to treatment, there have been many not-so-good days.  Fearing the bad days might outnumber the good, I elected not to count.

He has been in remission for several months but seldom feels good. So frustrating – for both of us!  Remission was supposed to return our lives to normal, or so we thought.

“What good is it to cure a patient’s cancer if the process leaves him or her incapable of living life?” Leslie J. Waltke, PT

My mission, as his Caregiver, was to try and find the reason since the good Dr. H., seemingly in bewilderment, could only shake his head. I took away every drug that I possibly could, without endangering his life, (didn’t stop the pain meds, or the BP med, or the Diabetes med, etc.)  all to no avail. Time to look elsewhere…….

When we met with the NP at his Pain Mgmt Specialist’s office, we discussed the need for more Dilaudid for breakthrough pain, as well as how badly he seemed to feel. We questioned if the pain meds could be the reason for his never feeling good. (The morning of our appointment, he felt so bad that he sat in the chair and slept while she visited with me). She questioned his low dosage of MS-Contin (15 mg. every 8 hours).  His Pain doc decided to increase the MS-Contin dosage to 30 mg every 12 hours and discontinue the Dilaudid. His pain is under control with the increased dosage, and discontinuing the Dilaudid seems to have made a difference in how he feels.  Amazing…..he had been on this med for well over one year. We could have stopped it (had anyone known) and he would have felt better! You’re kidding me!!!

In the meantime, he had Cellulitis in one of his toes and this required an antibiotic, which caused dizziness!  The antibiotic was completed the end of last week, and the dizziness appears to be getting better.

He’s actually doing pretty good. He’s in remission. His kidneys are functioning. His pain (other than his legs) is under control.  He hasn’t been to the hospital in 5 months! His appetite is pretty good. He looks good. We may have settled into that “New Normal” stage of our journey. Things are pretty stable…..

……now, if we can just get back to “living life” part of this “new normal”, it will be good.  Living life entails getting up out of this chair to which he has grown so accustomed. I suggested maybe it was time for some Physical Therapy and was met with resistance. So, I’ve started my own type of “Positive Re-enforcement Therapy”. I tell him how good he looks. I tell him he “looks” like he feels better. Some days it works – some it doesn’t. 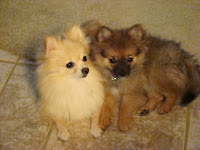 Therapy can come in many forms, and the latest”addition” to our family are really trying to do their part to bring a smile to both our faces. We rescued “Wee”, age 2, and “Precious”, age 5 months, both Toy Pomeranians. They get us up, out of our chairs, and help us to focus on something other than the roller coaster ride of MM.

How great it would be just to get on with living life, whether it be normal or new normal…..living life!!