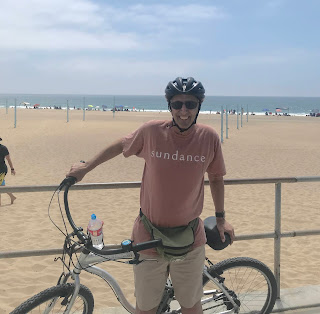 Day 70.  Life is slowly returning to a semblance of normal.  I’m driving, shopping, cooking, going to movies. Going to a debate watching party tonite.  I’ve been meditating almost daily and going on two mile walks most days – which I consider step 1 of my ultimate rehab.    But yesterday, I decided to try getting on a bike as step 2.  I was a bit skittish about jumping on my regular road bike.   Didn’t think clipping in was a good idea.  I was also cautioned that the skinny tires would be particularly slippery with so much sand on the bike path.  So, I went to the local bike store and rented an upright beach cruiser.  It was a real clunker.  Had 3 gears and weighed about a ton.  But it was a comfy ride and I was able to pedal from downtown Hermosa Beach to the North end of El Segundo  – about 8 miles round trip.  It took a bit more effort than I expected, but I was comfortable and quite happy to be riding again.  Especially on an almost perfect summer day along the beach.   It was very liberating.  Plan to go again tomorrow.  Next step will be to try to hit some tennis balls.
Numbers remain solid.  All systems go.