The last two weeks have been a crazy roller coaster. Two weeks ago I had just arrived in Houston – now I am back home in Mass.

The most important thing I’ve learned in the last couple of days is how many friends my mom and dad have! Everyone from people I’ve known since childhood to friends they’ve met through sports like tennis and golf (There were quite a few tennis outfits!).  We saw neighbors, friends we thought we might have lost touch with and even friends of friends we had never even met.

Dad was released from the hospital on the Wednesday after I got in. He was put on a regimen of  Chemo – Velacade – with a steroid called Dexamethasone. They administered the first dose before we left from the hospital.

Home from the Hospital

The next few days were a bit rocky.  They had given us a list of “chemo precautions” which included a lot of bathroom regulations. Flush three times, clean up the area. We gave Dad a separate bathroom and nicknamed it “Chernobyl.”

We had no idea what to feed Dad and everyone was bring all types of food. We were constantly waiting for some sort of crazy side effect to happen.

We had been given a collection of books and pamphlets about Multiple Myeloma by the hospital, but we still had questions. We had no idea the exact extent of the cancer. Would he be able to get a stem cell transplant? How advanced was it?

And we scoured the information we had on hand to try to determine if Dad was put on the right chemo. Did that mean that he was not a stem cell transplant candidate?

Mom was telling people Dad’s multiple myeloma was called “minimally secretive.” Which confused us even more as nothing came up for that term when we googled it. (We eventually came to understand that it meant that a not of proteins were being secreted, but we still have images of the cancer hiding secrets from us).

Our first doctor’s appointment on Friday cleared up quite a few questions. He was able to reassure us that Dad was not toxic and we did not have isolate ourselves from him.

In order to help the kidneys, he suggest Dad eat a limited amount of potassium.

We also learned that Dad would be on the chemo for two weeks and then off for two weeks.  Which gave Mom hope that they would make their Florida trip.  He cleared up the “secretive” issue.

Most of the calcium had been removed from the blood so Dad’s mental state should improve.

But due to a computer malfunction at the hospital, we received little about Dad’s actual condition. We were still in the dark about the exact protein type and location of the bone lesions.

The following days were full of changes and adjustments. Dad was in a lot of pain in his chest area and that made it hard to get up and down stairs, get in or out of bed and even stand up out of a chair. We ate our meals in the living room as the kitchen chairs were too hard for him.  And we didn’t go out much. Mom arranged to have the bed moved from the second floor to the first.

Dad used to drive everywhere, now it was Mom.  There were bills to be paid and payrolls to send out, but Mom had to do it instead of Dad.

We were also learning more about Potassium. Apparently, it was in EVERYTHING. Tomatoes, potatoes, most fruits, whole grains, etc.

The real positive was the visits. Our house had become a revolving door and there was a constant party going on. People showed up in groups with foods of all types. Some were home cooked, some were bought, and some people brought wine!

No matter how badly Dad was feeling before people showed up, his mood did a complete 180 when someone showed up at the doors. Talking to people helped keep his mind off of the bad things and he loved the attention.

When we showed up on Tuesday, the news was not as positive as the first one.  The doctor remembered my previous questions and this time he had answers for me.

The protein was kappa light chain.  In the classic sense of myeloma, the protein looks like the following image, complete with two light and two heavy protein chains. 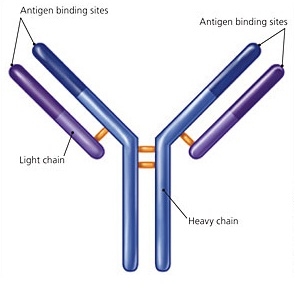 Dad’s only has the light chains (the purple ones), which are smaller and harder to detect.

We also learned that Dad’s pain was caused by the disease, not the steroids or anything else. He prescribed Dad some Vicodin and told us to pick up baby aspirins.

The kidney function was estimated at 33%. Which was not as high as we thought it was. This was very concerning as improved function is required for more aggressive treatments like the stem cell transplant. We would know the total amount the kidneys would recover in a month or so.

We still did not receive a copy of a bone scan or xray, but the doctor told us the damage was minimal and there were no tumors.  Some of the lesions were in the spine.

The Dr also said he wanted Dad to come in for a blood transfusion.

And Mom got the paperwork for a handicapped parking spot for Dad.

They administered his chemo at the doctor’s office while Mom and I waited in the waiting room. It didn’t take more than 10 minutes.

After the chemo appointment, we finally picked up our dog Toby who had been boarded while Dad was in the hospital.  I took him home, fed him a flea pill and washed him with some yummy smelling pear dog shampoo.

Later that night, people came over and we had some delicious roast beef.  Toby was all excited and we were happy to have him back.  We fed him lots of treats and some of the meat.

When everyone left, Toby was violently sick.  He was throwing up for about an hour and then he started shaking.

Dad had taken his pain pill (thank goodness!) and was passed out throughout this. Mom and I didn’t know what to do. We decided to take Toby to the vet emergency room.

We were at the vet for 3 hours. It turns out the fat had caused pancreatisis. If we had waited much longer, it might have been fatal.

We ended up learning the expensive way not to feed the dog table scraps. The good news was that with a low fat diet, Toby would be fine.

Dad went in on Wednesday to get tested for his blood type. On Thursday he spent the whole day (8am – 5pm) getting a blood transfusion. When he got home, he wasn’t feeling very well.  Which was surprising because most people said he would feel more energized. However when Loree and Richard showed up to take me home, he seemed to be perking up a bit.

I felt terrible leaving, but Michael’s dad was due to visit us the next day in Massachusetts and I needed to get back.

When I arrived in Boston the next day, Mom said that Dad was doing much better.  His friend Mark was flying back into town and their Burger King friend Rick was also there.

It’s hard being back home because I’m no longer in the loop. It’s easier for Mom to forget to give me updates or to not want to upset me.  I’m a little worried about her. She was so sleep deprived when I left.

The one thing I’m realizing is that life is short and you should enjoy it. Stress and worry are some of the worst things you can do to your body.

I will do my best to update this site with any news I get. You can also sign up on the left side bar for updates about Dad. These will come directly to your inbox whenever I add a new post.

Thanks to everyone for your prayers and thoughts. It’s been amazing to know what an amazing support team my parents have through this hard time.