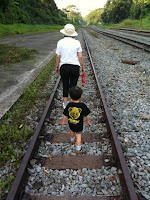 Yesterday morning, P and I, and dog and grandson T, made the KTM track walk before it is closed to public in 2 days’ time. The Tanjong Pagar Station officially closed at end of June and the tracks opened to public till mid July but a small section from Rifle Range to Rail Mall will remain open till end of July. Hopefully, our civil service officers from the National Environment or Park Agency will consider the many requests from Singaporeans and residents, to preserve and convert the land into a green corridor. We really need to keep more of these outdoor spaces in its original and not concretize every bits of available land. Recent news was announced on redevelopment of the Bukit Brown cemetery, situated right in the midst of central, prime property. This raised many objections from nature lovers and of course not forgetting descendants and family members of all those buried there! It is a cemetry with lots of history. The story of Bukit Brown has to come under another post. 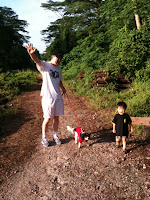 We have seen many people walking the tracks the past two weeks and decided that we should also make a last visit. The Bukit Timah station is just a stone throw from our home. We stepped on the tracks, very safe, no train will be chugging by. It’s not easy walking on the tracks, they were layered with granite stones on all sides. I’d rather step on the wooden plats than the granites.
The surrounds of greenery is raw and rustic. We heard sounds of birds but didn’t spot any. I’d thought there would be plenty of monkeys but none seen. No squirrels too. Surprising. Maybe there have been too many human intruders the past weeks.
Little Thadd, at 26 months is a good walker, he walked by himself on the granite covered tracks, stopping now and then to touch the greenery. He kept asking to see monkeys; to him, this is jungle and we always tell him that the monkeys who roam along the fences and gates of our neighbourhood, return to the jungle at night. 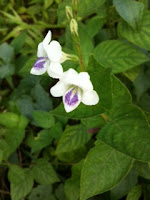