It is June, half-way through the year, so it seems like a good time to revisit my new year’s resolutions.
You probably won’t remember, but I decided that 2013 was the year I would start (1) doing things “for keeps”, and that (2) I would reward myself with a “small indulgence” every time I made something for someone else.

How’s it been going Roo?

(1) Doing things “for keeps” has had the knock-on effect of me giving myself permission to use the best fabrics in my stash, and to knit with the yarn I had saved for… for… I don’t know what really!  As a result, my knitting and sewing has felt a lot more special. I have paid more attention to a good quality of finish and at the end of a project have found myself with something I genuinely like and want to wear or give to someone else – woo hoo! 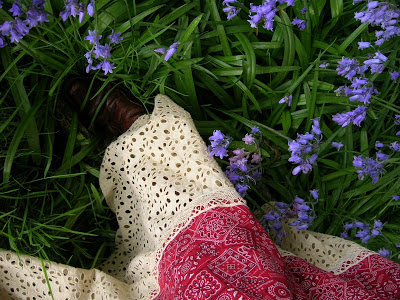 I bought the July issue of Vogue… Yeah, yeah, don’t worry, FL has already poked enough fun at me about this petrol-station impulse purchase – you don’t need to have a dig too! It is devoted to the topic of age, and in one article, Charlotte somebody writes about how she realised that her “staples” have stayed the same as she aged, only now that she is older, she is buying the best-quality version of them that she can find/ afford.
I absolutely get that!  If psychological theory is to be believed, we tend to feel nostalgia for our late teens / early twenties, because those are the years when we became recognisably “ourselves”.  Charlotte’s staples are the items she wore in her youth.  Mine are probably the ones I wished I had worn!  But as long as I don’t look like I am having a mid-life crisis (you will tell me won’t you?) I see no harm in gathering together the styles I identify with being “me”. 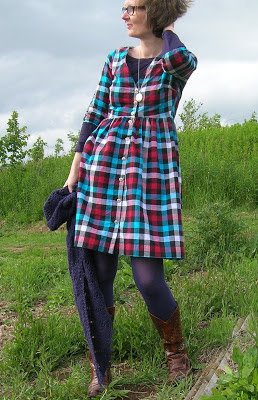 News Flash:  I have given myself permission to BE ME! :O

And I am still working on my Kex Blanket.

(2) At the start of my small indulgences experiment, I showed you my first rewards:  stitchmarkers, a notebook, soap… and then I went quiet.  You may have thought I had forgotten about the new regime?  Um… no.  Instead, I had already accounted for FL’s birthday socks with another order of Future Primitive Soap.  I have control of my addiction, honest!  But delicious smells have become part of my life now.  There is soap in my yarn stash, in my underwear drawer, in the shower and at the side of the kitchen sink.  Every morning, I inhale deeply before I go out to face the world.  Life changing aroma-therapy,  I kid you not.
I spend far too long in the shower every morning breathing in The Shire:  “Orchards in blossom, Birds nesting in the Hazel thicket, Summer Barley & the barest hint of Heirloom Strawberries.”  It’s true!  And it looks like blue skies over the fields :D 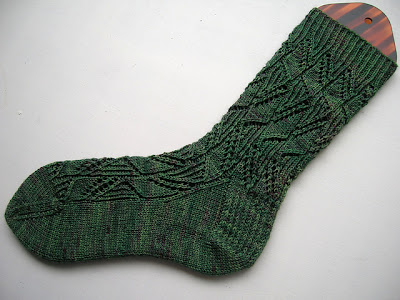 Right now, I am motoring down sock two of a pair of Rachel Coopey Willowherb socks for Christine.
Now, although she has already rewarded me for these with the JC Rennie’s aran wool I used for my Lonely Tree Shawl, and some handspun and some Albayarn,  I think I might allow myself a yarny treat for finishing these.  Even though the knitting is a treat in itself!  Maybe a skein of Countess Ablaze sock yarn?  I do love the Northern Lights colourway!

So, yes, I am being pretty good to myself this year.
And best of all?
I have planned a mini-break with The Girl, just the two of us – yay!  Girl-time!
We are going to Hebden Bridge for 3 days in the summer.  3 days of vegan alternative mooching with a splash of Plath and a buttering of Brontes.  Yay!
FL is slightly bewildered by the plan, but fingers crossed he will be well enough to manage on his own for 3 days.  He just MUST.